Minister of state for railways Manoj Sinha had ruled out an inquiry into the incident on Saturday. 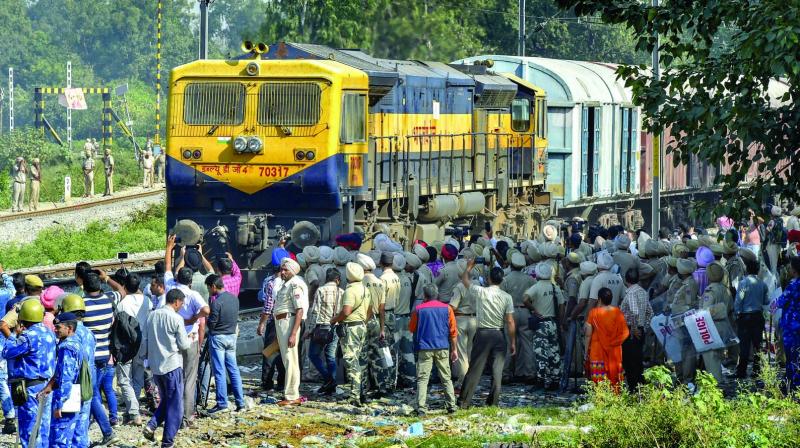 Security on high alert as the first train passes by before resumption of railway services since the train accident in Amritsar. (Photo: PTI)

Amritsar: A police commando and a photojournalist were injured on Sunday when protesters pelted stones and clashed with security personnel who removed them from a rail track where 59 Dussehra revellers were mowed down by a train, officials said, adding that traffic was restored on the route.

The agitated protesters blocking the track were removed and train services resumed this afternoon with the movement of a goods train, 40 hours after the horrific accident. The first passenger train Amritsar-Gorakhpur Express started at 7 pm, Northern Railway spokesperson Deepak Kumar said. On Friday evening, a gathering of more than 300 people were on the tracks to watch the burning of a Ravana effigy when the speeding train struck leaving 59 dead and scores injured. The railways got the clearance from local authorities at 12:30 pm to restore services, the railway spokesperson said.

Meanwhile, the Congress questioned the railways over its decision not to initiate a probe into the Amritsar train accident. At a press conference, party spokesperson Abhishek Manu Singhvi said while his party’s first concern remained the rehabilitation and relief of those injured and those who had lost their loved ones, it was “cruel” of the railways to reject an inquiry into the incident.

Minister of state for railways Manoj Sinha had ruled out an inquiry into the incident on Saturday.

“There was a curve. The driver couldn’t have seen it. What should we order an inquiry about? Trains travel in speed only,” said Mr Sinha.

In a Facebook post on Sunday, Railway Board chairman Ashwani Lohani maintained the Indian Railways’ stand on the matter. “Today we called a spade a spade. If IR is not at fault why beat about the bush. If our staff have done no wrong why hang them. We have to come out of our shells if the organisation has to flourish...,” he said.

Earlier in the day, the Punjab Police cleared the track off the protesters who were staging a sit-in. They resorted to stone-pelting and clashed with security personnel after being removed, officials said. A Punjab police commando and a photojournalist were injured during the clash, they said. The protestors were raising slogans against the state government and demanding resignation of Punjab minister Navjot Singh Sidhu. The Punjab police has deployed its personnel, including commandoes, to manage the crowd. The Rapid Action Force was also present in the Joda Patak area, officials said.

Meanwhile, chief minister Amarinder Singh directed the Amritsar administration to prepare detailed socio-economic profiles of victims.  Singh, who met some of the survivors in hospitals Saturday, was particularly moved by tales of two young women who lost their entire family including children and husbands, and in one case her in-laws, an official release said.

Anguished at the plight of such survivors, Mr Singh told chief Principal secretary Suresh Kumar that the government needed to do more than just giving `5 lakh ex gratia, especially in cases where victims were poor.

The senior Congress leader announced that a proper system would be worked out to ensure that such survivors were rehabilitated by the state at the earliest. He also directed that ration, clothing, medicines etc be provided to the families of the victims as most were from the economically weaker sections of the society.

Mr Singh reviewed the relief and rehabilitation work with the Crisis Management Group of ministers headed by state Health Minister Brahm Mohindra, and directed them to take immediate steps for early disbursement of the compensation.

All steps should be taken for the effective rehabilitation of the survivors and families of the victims, he added. The Crisis Management Group was set up by the state government on Friday, immediately after the disaster struck.