Exit polls predict landslide win for BJP in both states

Congress may do worse in Maharashtra, Haryana than in Lok Sabha polls. 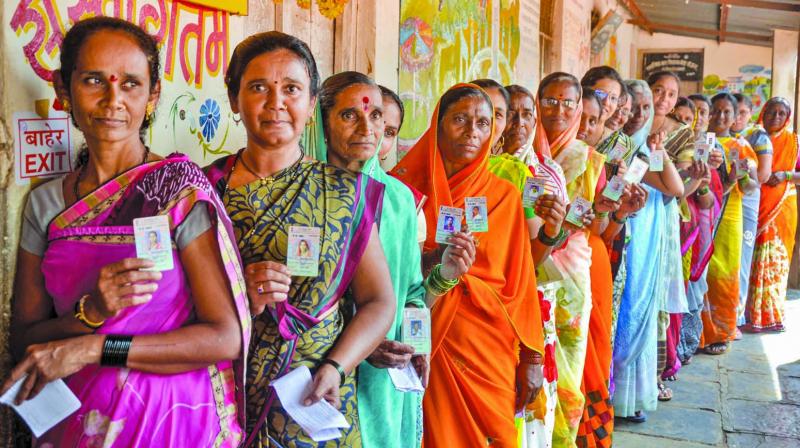 Voters display their identity cards as they wait in a queue to cast their votes for the Maharashtra Assembly polls in Sangli on Monday. (Photo: PTI)

New Delhi: The exit polls have predicted a landslide victory for the BJP-led National Democratic Alliance in both the Maharashtra and Haryana Assembly polls held on Monday. While most exit polls predicted a saffron tsunami, the TV9 Bharatvarsh poll indicated a hung Assembly in Haryana.

Going by the exit polls, the BJP-Shiv Sena alliance is expected to form the government in Maharashtra again, while in Haryana incumbent CM Manohar Kal Khattar will get a second term. Once elected, Shiv Sena’s Aditya Thackeray, who made his political debut, is likely to get a major portfolio as he makes a start in governance.

In Maharashtra, the “Poll of Exit Polls” showed that the BJP-Sena alliance had a clear roll over their rivals, Congress and Nationalist Congress Party (NCP), with 218 seats predicted for the ruling alliance in the 288-member Assembly.

The Congress-NCP is expected to get 57 seats, while others may get 13. Interestingly, the BJP-Sena had contested the 2014 Assembly polls separately and later came together to form the government. But this time they decided to be together from the beginning itself to avoid splitting of votes and giving the Congress-NCP alliance an advantage.

In Haryana too, the “Poll of Exit Polls” gave the BJP 66 seats in the Assembly of 90, while giving 14 to the Congress, two to the INLD and Akali Dal alliance and eight to others.

The results of these exit polls are a major blow to the Congress, which was hoping to revive its fortunes in the two states. The party had hoped to encash on the brewing dissent among people over economic slowdown and loss of jobs. However, the BJP juggernaut apparently rolled on unhindered in both states as the Congress was bogged down by internal strife and factionalism.

The Assembly elections were also the first big test for both first-time chief ministers — Devendra Fadnavis and Manohar Lal Khattar. The main BJP plank for both the states was largely polarising national issues, ranging from the abrogation of Article 370 in Kashmir to the National Register of Citizens, and the ruling party avoided local issues and the economic slowdown.

The BJP also strategically changed several sitting MLAs to handle the possibility of an anti-incumbency mood against the local leaders. The BJP had also fielded sportpersons like Babita Phogat and Yogeshwar Dutt and TikTok star Sonali Phogat to encash on their wide popularity.

In Maharashtra, the Congress seemed to have handed over the baton to NCP chief Sharad Pawar to lead the campaign. Mr Pawar exuded confidence and predicted a change of government even as voting was going on.

The polling for the Assembly seats in both the states ended on Monday. The votes will be counted on Thursday, October 24.

The day started with a lukewarm response by voters with only 37.64 per cent turnout by 2 pm in Haryana and 30.91 per cent in Maharashtra. While it picked up marginally in both states after lunch, the final voter turnout in Maharashtra remained at 55.45 per cent and in Haryana it was 61.92 per cent.

In big cities like Gurgaon the polling percentage was far less, at 51.6 per cent, compared to 2014 when it was 64.1 per cent. In addition to the Assembly polls in the two states, there were bypolls in 51 Assembly and two Lok Sabha seats in 18 states, where the overall voter turnout was close to 57 per cent.