Advisory said that it was clear that Pakistani intelligence operatives are targeting Army personnel and their families have been targeted. 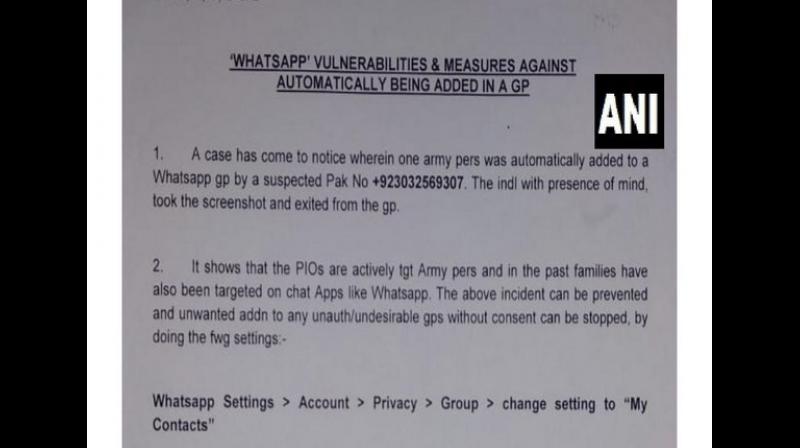 It suggested that Army officers and their families should change settings of their WhatsApp chats where they can be added to groups only by those people who are present in their contact list. (Photo: ANI)

New Delhi: ISI is continuing to target defence personnel on social media for gathering information as a new case has come to light where a Pakistani intelligence operative automatically added an Indian Army officer to a Whatsapp group after which the force issued an advisory to its personnel to change their WhatsApp settings.

"A case has come to notice that an Army person was automatically added to a WhatsApp group by a suspected Pakistani number +9230332569307. The individual showed his presence of mind and exited the group after taking its screenshot," the Army advisory issued on November 11 said.

The advisory also said that it was clear that the Pakistani intelligence operatives are targeting Army personnel and their families have also been targeted in the past in social media chat applications such as WhatsApp.

"The above incident can be prevented and unwanted addition to any unauthorised or undesirable groups without consent can be stopped by changing the settings," the advisory said.

It suggested that Army officers and their families should change settings of their WhatsApp chats where they can be added to groups only by those people who are present in their contact list.

The advisory has come at a time when recently two Army jawans were virtually honey-trapped by Pakistani virtual spies who chat and interact with Indian defence personnel over social media applications to gain classified information.

In the last few years, there have been several cases where senior officers up to the rank of Group Captain have been compromised by the Pakistani spies using virtual women to trap Indian officers and jawans.

In a number of cases, the interactions between personnel and virtual social media IDs have started with a chat about military aspects leading to virtual honeytrap.

In wake of such incidents, the Army has warned its personnel against being part of any unknown WhatsApp group and also barred them from displaying their military links there.