Needless to say, India should try best to influence through diplomatic forums without appearing to 'poke its nose” into the neighbour's affairs. 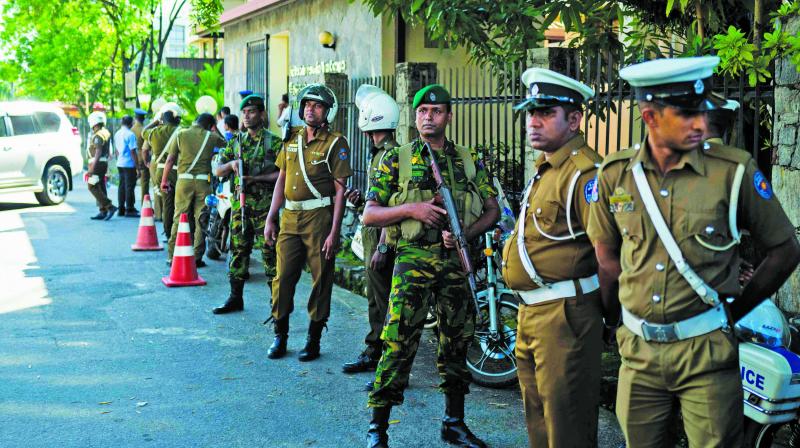 Security personnel stand guard near the Election Commission office in Colombo, before the arrival of President-elect Gotabaya Rajapaksa. (Photo: AFP)

Chennai: We can do either of the only two options now available responding to the Rajapaksa victory. We can go beyond congratulating him on the Twitter and genuinely reach out in trying to consolidate relations with Mahinda in the larger interests of regional development in terms of economy, Tamil reconciliation and most importantly the fight against Islamic terror. The other option is to cry real loud so it would please our friends and foes in Tamil Nadu, that the poll victory of Gotabhaya would mean the resurgence of state-sponsored racial violence targeting the minorities in the north and the east.

The first option could take us towards the beginning of a new chapter of good neighbourly relations based on mutual trust; even more important, it could try denting the fast-growing influence of China in the region. The Red Dragon has already spread its wings and buried the claws deep into the little Indian Ocean island it sees as a strategic partner in not just protecting its sea traffic bringing the wealth mined in Africa but also as a military ally should any need arise to torment India.

The second option would take us nowhere; particularly since Gotabhaya has won a decisive victory in the Saturday poll and his elder brother Mahinda has already made it clear he has plans to get elected as the Prime Minister early next year, so that the two brothers could run the government effectively. MR, as he is known, said so in clear terms in an interview he gave this writer on the eve of the massive convention of the resurgent Sri Lanka Podujana Peramuna in Colombo on August 11, where he announced his brother Gotabhaya as the SLPP's Presidential candidate.

Detractors see the present electoral victory as the return of the Rajapaksa brothers to take control of Sri Lankan governance and more importantly, crushing the rival organisations with an iron hand the way they ran the country soon after winning the Eelam war in May 2009.

India would do well in trying to sew up its damaged equations with the Rajapaksas instead of further screwing up its relations with the southern neighbour. Indian diplomacy should ruminate on its past mistakes and look at long-term strategies to keep Sri Lanka a friend rather than continue playing smart tricks-not so smart actually as Delhi has been steadily yielding space on the ring to Beijing-hoping to keep the 'pigmy' subservient to the 'Big Brother'.

In the modern world, pigmies do not remain pigmies to be bullied, as they grab opportunities to ally with other powerful nations not quite friendly towards the 'Big Brother'. It's time that the Indian foreign ministry counts on its fingers the number of truly friendly neighbours and those that Delhi let slip away from the lap.

Shortly after the announcement of Gotabhaya's victory, a prominent member of Tamil Diaspora in London, Charles Antonidas, called to express anguish and share thought on what the Tamils should do in the hostile Rajapaksa dispensation. It did not take him long to concede that the Diaspora, as well as those 'back home' in Lanka, should seek ways of working closely with the new dispensation in Colombo in order to get the Tamil issues solved.

“We must now understand that the Rajapaksas are here to stay, and stay strong in the government, and that we must work with this dispensation to get our issues solved,” said Charles, who had represented the India-sponsored peace talks between the Tamil militants and the Sri Lankan government in Thimpu (1985).

Another Tamil Diaspora leader, who wished anonymity, said it was “surprising and is a matter for concern” that Indian attempts to help Sajith Premadasa in the Presidential election did not succeed. Asked what made him think India backed Premadasa at the cost of Mahinda, he shot back, “Well, we all know India helped Sajith with funds and helicopter for his campaign”.

Perhaps this Diaspora friend is misinformed, perhaps. But the suspicion remains strong in the Rajapaksa camp that India continues to be hostile. And that should get Delhi to seriously think if tripping Rajapaksa because he is seen as pro-China would mean trying to replace him with a weak dummy. Rewind to the charge made by Mahinda after losing to his little-known minister Maithripala Sirisena in the Presidential poll of 2015; he had accused India and its RAW of orchestrating his defeat.

And perhaps recalling just that, albeit indirectly, the Sinhala strongman said in his opening response to brother Gotabhaya's victory now that the voter must be saluted, “for decisively defeating the 2015 style attempt made to once purloin the mandate of the people through backroom deals with various chauvinistic ethnic and religious groupings organized around narrow political agendas”. The time has now come to put an end to “this dangerous game of promoting religious and ethnic chauvinism for political purposes”, he has said, indicating there would be some drastic measures planned in reviewing neighbourly relations and the future governance internally.

He has made known he would study the provisions of the 19th Amendment and plan the “immediate programme of action accordingly” so as to provide “a sense of direction to this country which has been drifting rudderless for five years” and also, as stated in his candidate's election manifesto, “introduce constitutional and legal reforms” to achieve better governance and improved economy. Needless to say, India should try best to influence through diplomatic forums without appearing to 'poke its nose” into the neighbour's affairs.

While releasing his poll manifesto (October 25), Gotabhaya had stated unequivocally that his government “will not allow outsiders to interfere in Sri Lanka's domestic affairs”. It does not need great intelligence and wisdom to detect that the 'warning' was aimed at the neighbour up north across the Palk Strait.

And it does need sustained diplomatic efforts initiated by better planners than those holding fort at present, to convince Rajapaksa that sharing mutual concerns and the burden of seeking solutions in transparent manner, is no 'interference in domestic affairs'.

“We must quickly reach out to Rajapaksa in not just congratulating but also planning an effective roadmap at winning back his trust. This would need some tinkering of the priorities for the country that would focus on long-term national interests instead of remaining locked down by regional and local pressures”, said a senior officer who has been handling the Lankan issue for many years. “We must know that Rajapaksa is a strong leader there and will remain so for a long time. And he is actually pro-India, has great affinity for our country and its people. He does not do anything major without worshipping at Tirupati. We should use all these factors to reach out”, he said.

Sri Lanka observers also point to BJP senior Dr Subramanian Swamy as another possibility as the peace negotiator with Rajapaksa. He has been in touch with the former President for a long time and in fact said recently that he would get the Tamils their due political rights from Rajapaksa if they vote for Gotabhaya in this elections. Well, Tamils did not vote for the SLPP but that should not stop Dr Swamy from trying to carry out his promise.

Apart from Dr Swamy and Lord Venkateswara, Gautama Buddha too could play a role in helping the Indian foreign ministry to mend its fences with Rajapaksa. Remember Prime Minister Narendra Modi had visited Colombo for a major International Buddhist Conference in May 2017? Quick revival of the mutual interests in The Dharma could help
bridge relations not only between India and the Buddhist-dominated Lankan government but also in trying to get relief for the Hindu Tamils up north. “We need to strengthen relations with Rajapaksa to address our problems with Islamic terror”, said a senior intelligence official, pointing out that the Easter blasts in Colombo has created the dire need for such collaboration.

“The two countries need to fight terror together. India should engage MR (Mahinda Rajapaksa). Gotabhaya is a democratically elected leader. We could belong to two different religions but ethnically, we are one and the same”, he said.