Court pulls up CBI for shoddy probe, says everybody was only going by public perception. 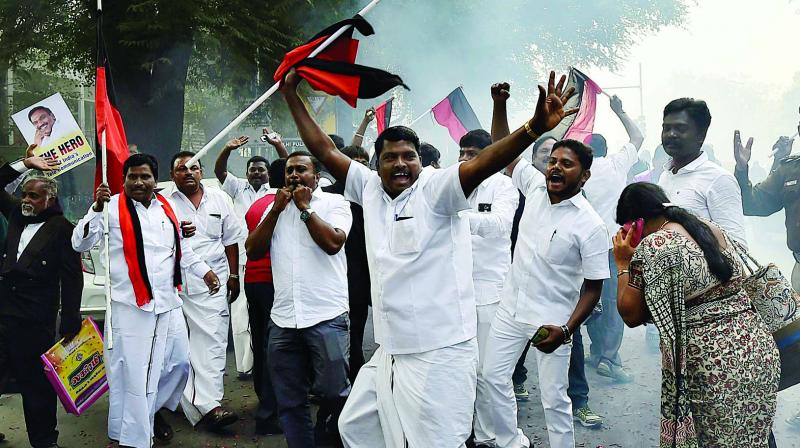 Former communications minister A. Raja's supporters dance as they celebrate his acquittal by a special court in New Delhi. (Photo: PTI)

New Delhi: The CBI court on Thursday strongly slammed the premier investigating agency for presenting shoddy evidence without any coordination resulting in the acquittal of all the 17 accused in the 2G scam.

In his judgment, Judge O.P. Saini also came down heavily on the Supreme Court-appointed special public prosecutor Anand Grover, holding that the quality of prosecution in this case had totally deteriorated and by the end it became directionless.

Initially, Uday Lalit, who later became a judge of the apex court, led the prosecution team and Anand Grover was appointed as SPP in his place. Tracing the genesis, the court said, “The CBI had started its case with great enthusiasm and ardour. But at the final stage of the trial SPP Anand Grover and the regular CBI prosecutor moved in two different directions without any coordination. As the case progressed, it became highly cautious and guarded in its attitude making it difficult to find out as to what prosecution wanted to prove.”

Expressing his anguish for seven years of trial, the judge said “may also add that for the last about seven years working on all days, summer vacation included, I religiously sat in the open court from 10 am to 5 pm, awaiting for someone with some legally admissible evidence in his possession, but all in vain. Not a single soul turned up. This indicates that everybody was going by public perception created by rumour, gossip and speculation. However, public perception has no place in judicial proceedings.”

On the manner of CBI probe, the judge said “the  prosecution endeavoured hard to make use of selective notes recorded by different officers in the official file of DoT to rope in the accused. My attention was invited to different notes to emphasise that A. Raja was going contracy to official policy. Even internal contradictions in different notes recorded by different officers was sought to be used against A. Raja. Some of the notes which were favourable to the accused were not even proved by the prosecution in the hope that the same will not be read.”