The reaction came in the wake of derogatory language used against the Valmiki community by Salman and Shilpa Shetty during the promotion. 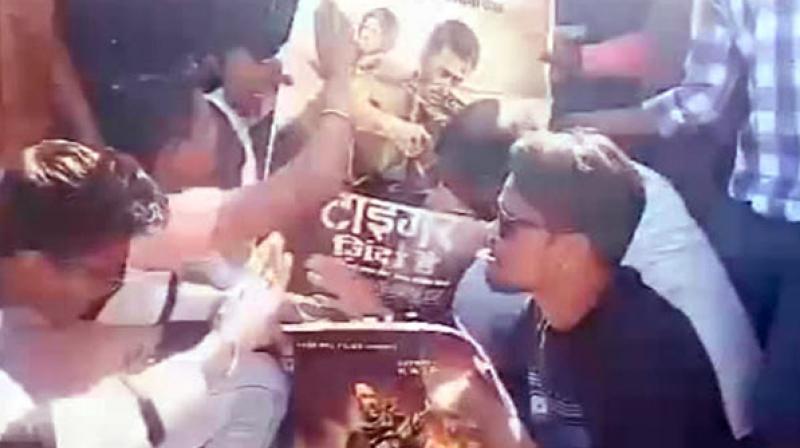 Several morning shows were cancelled as protesters burnt effigies of Salman and the film’s banners and posters were pulled down. (Photo: ANI)

Members of Valmiki community vandalised cinema halls across the state in reaction to derogatory language for the community used by Salman and Shilpa Shetty during film’s promotion in reality show Big Boss.

Several morning shows have been cancelled as protesters in Jodhpur, Kota , Udaipur, Ajmer, Behrore, Dausa, Nagaur and Nasirabad burnt effigies of Salman and film’s banners and posters were pulled down.

At Jaipur they protested outside the famous Rajmandir cinema hall and shouted slogans against Salman Khan. Police has been deployed at several cinema halls.

A First Information Report (FIR) under relevant sections of the IPC and SC/ST Act was also registered against film actors Salman Khan and Shilpa Shetty in Churu. A Deputy SP has been appointed the investigating officer in the case.

The protesters in Udaipur also gave a memorandum to the police and demanded that a case be registered against Salman under the SC ST atrocities Act. The police ensured that the protests did not turn violent and remanded several people in custody.

Vikram Valmiki, state president, Valmiki Sena said, “We will continue with our protest until Salman Khan apologises. We have no issues with the film. There will be a meeting of the representatives of the community at Jaipur today to chalk out plan for future action.”