Sachin could not make his maiden speech in the Upper House on Thursday as the house was adjourned after Opposition uproar. 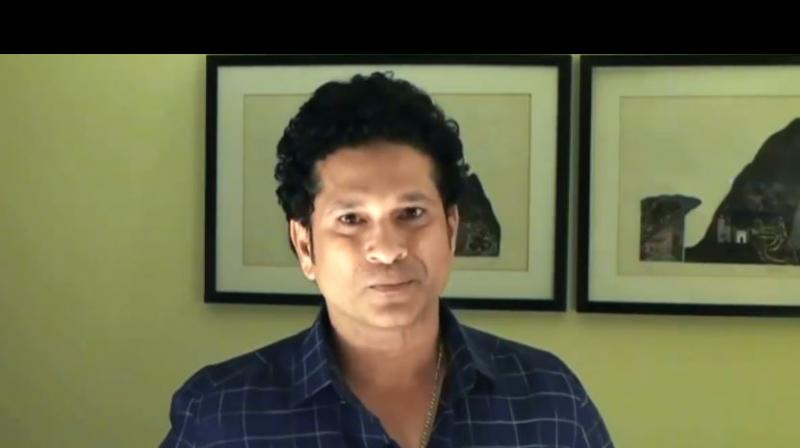 Tendulkar was forced to stop his maiden speech in the House and he took to social networking site Facebook to reach out to countrymen to share what he was supposed to speak in the Upper House. (Photo: Screengrab)

New Delhi: A day after cricket legend and Rajya Sabha MP Sachin Tendulkar was forced to stop his maiden speech in the House due to Congress protest in the Parliament, he took to social networking site Facebook to reach out to countrymen to share what he was supposed to speak in the Upper House.

Sachin read out the speech that he was supposed to deliver in the Rajya Sabha on Thursday.

Here is the speech that MP Sachin Tendulkar was supposed to deliver in the Rajya Sabha:

I often wonder what brought me here. Little that I realised that was baby steps in cricket would leave me to great lifetime memories. I always love playing sport and cricket was my life. My father professor Ramesh Tendulkar was a poet and a writer. He always supported me and encouraged me to be what I wanted to be in life. The greatest gift I got from him was the freedom to play, the right to play and I will be always grateful to him for that.

There are many pressing matters in our country which requires our attention - economic growth, poverty, food security, healthcare among many others.

Being a sportsman, I am going to talk on sports, health and fitness of India for it has a telling impact on our economy.

My vision is a healthy and fit India. Jab Swastha Yuva tab Desh mein Kuch Hua (When the youth is healthy, the country will progress).

India is set to emerge as the youngest average age nation in the world by 2020. So the assumption is yeh young hai toh fit hai (they are fit because they are young) but we are wrong.

We are the diabetic capital of the world with over 75 million people being affected by this disease and when it comes to obesity, we are sitting at number three in this world. The economic burden of these diseases will not allow our nation to progress.

According to a United Nations (UN) report, the impact on the Indian economy of non communicable diseases from the year 2012 to 2030 will be USD 6.3 trillion.

But I feel uske liye (for that) we need a plan to be a sporting nation, to change our sedentary lifestyle, unhealthy mindset.

Many of us only discuss but we don't play at all. We need to transform India from a sport loving nation to a sport playing nation. Make everyone more active and participative. Inculcate and develop a sporting culture in our country.

The north-east of India which has only 4 per cent population in India has a vibrant sporting culture. It has produce many sporting heroes including our boxing icon Mary Kom, recently crowned champion weight lifter Mirabai Chanu, Dipa Karmakar, Bhaichung Bhutia, Sarita Devi, Sanjita Chanu and many many more.

From being a naughty child to chasing a dream to win the world cup for India, I became more disciplined and more focused.

I had a goal and I started planning for it. But the most important aspect was the execution of those plans. Not always did I succeed. There were occasions where I failed but sports taught me to get back to my feet again and compete in the fairest possible manner.

I fondly recall a few lines shared by my father many years ago.

We must build a sporting culture in our country. Otherwise a young, unfit, unhealthy India is a recipe for disaster.

I am humbly proposing the framework of three 'I's in the country -- Invest, Insure, Immortalise.

Invest - We must invest our own time and effort and ensure our wellness. Each one of us needs to start adopting an active sport and play it regularly.

We have our honourable chairperson who loves his game of badminton much like the famous poet and lyricist Gulzar saheb's love for tennis.

Age is no bar as we are a country where one of the oldest marathon runners is the 101 year old Parmeswaran EP from Kochi whom I met recently.

Our citizens and school children should have access to more sports infrastructure, open spaces, and playgrounds should be retained.

In this context, I appeal to the honourable Minister for Corporate Affairs Arun Jaitleyji to kindly consider a percentage of CSR spend be made compulsory for the development of sports infrastructure.

At a policy level, sport should be at par with any other subjects in schools. Children representing school, district, state or country should get added marks or grades.

This has been an area that I have been pursuing since the beginning of my tenure. I am grateful that it is indeed under serious consideration with the HRD and the sports ministry working on the same.

Daughters of India have shown what they are capable of with champions like Sindhu, Sakshi, Saina, Sania, Mithali and the list goes on and on.

When dreams don't discriminate then why do we?

I want to appreciate their parents, their family members, their coaches, their friends for helping them, for encouraging them and that is the only reason they have reached here.

My message to parents is to give equal support and encouragement to their daughters and sons and they will make them proud.

Before the Olympics or major sporting event, our expectations go skyrocketing.

We realise things are changing for good and that they have adopted long term approach on preparation.

Along with earlier identification of talent, we must also have a dedicated squad guiding our athletes' preparations and I feel it is extremely important to have a full time support staff around our athletes and winning medals should be their target as well.

Last year before the Olympics, one of our wrestlers was travelling to America for better sparring partners and to learn modern methods of wrestling.

Could we have got them to India instead and used digital India to share the training sessions with the rest of our coaches and I back that up with my conversation with our badminton icon Pullela Gopichand who said there is an abundant badminton talent in India but he was concerned about the coaching standards in our country.

I am sure financial security is often a challenge when any sport person decides to focus on sports alone as their career. I am sure our colleague and former India Hockey captain Dilip Tirkey will agree that in most cases the sporting career ends at the early age 35 40 years, Ironically it is an age where a professional’s career usually takes off or is rather stable.

I am also aware that the government through its many institutions employs sportspersons and supports them, which we all appreciate but we have many national, state, district level retired athletes who don’t have a proper job. Some of them are probably passing files from one table to another.

While ensuring their financial stability, we must also keep their minds engaged. Their skills and passion for sports will be best utilized for coaching our future generation.

A case in point is the life of Naori Mundu who was a national level hockey player from Jharkhand. Following the end of her playing career she doubles up as a teacher and works in the farm to make ends meet.

Sita Sahu, a medallist in special Olympics in Athens in 2011, is selling golgappas to manage her life.

We need to create an organisation and engage these athletes to train our school children and identify talent at an early age.

There is so much these athletes have to offer back to our society.

It is also imperative to have health insurance for all our national level athletes.

The struggles faced by our hockey great, Mohammed Shahid in his last days reiterate the need to prevent such unfortunate situations.

The life of Shamsher Khan is another reminder of how we have failed our national heroes. The champion swimmer who represented India in the 1956 summer Olympics, he finished 5th place, which continues to be the best Indian finish in the last 6 decades. He developed hearing and heart problems and due to financial constraints continued to live with these problems till his death.

Our national heroes should be able to live a respectable life. Extending CJHS benefits to them is a step in that direction. I appeal to the honourable minister of health and family welfare, J P Naddaji to kindly consider my request in this issue, which is in line with the recommendations put forth by the AICS.

Along with what is happening around in the world of sport, I think it is extremely important that the youngsters learn about our sporting history.

All of us have had heroes in life who have inspired us on various occasions. As a proposed sample, we have compiled a book on some of our unforgettable heroes among many others. I sincerely feel the lives of these champions should be part of our curriculum.

Sport can create hope where once there was only despair, said Nelson Mandela.

In the year 2009, this august house passed the right of children to free and compulsory education bill. It is my humble suggestion that the act be amended to include the right to play.

Sports can be considered an essential and mandated part of the curriculum. Consequently each child should get the right to play a sport at school.

Maata pitaa jaise aaj tak apne baccho ko pucchte aaye hain ki kya tumne khaana khaaya, kya tumne padhaai ki, mere liye who din sab se bada din hoga, jab in dono cheezon ke saath maata pita apne baccho ko yeh bhi pucchenge ke aaj tum khele ya nahin. (Parents usually ask their children if they have eaten or not, studied or not, for me it will be the greatest day when along with these two questions, they will also ask if the child has played or not).

I want to thank all of you for listening to me. Together we can build a sporting culture in India and transform the way we live, and play. Jai Hind.

The moment Sachin rose to speak in the House after it re-convened at 2 pm on Thursday, Congress members once again created ruckus in the house leading to an adjournment for the day.

The proceedings were disrupted by the Opposition for the fifth consecutive day where they have been demanding Prime Minister Narendra Modi to clarify on his remarks against former prime minister Manmohan Singh during the Gujarat poll campaign.

Cricket legend Sachin had moved a Short Discussion Motion on the future of sports in the country and right to play. His maiden speech in the House was, however, marred with the Congress stalling the session.

Naidu reminded the parliamentarians that the nation was watching the uproar they were causing in the Rajya Sabha and called on them to let Sachin speak. But Congress MPs paid no heed to his requests.

As his appeals for order went unheard, Rajya Sabha chairman M Venkaiah Naidu reportedly said: “We’re discussing about sports and you don’t have the sporting spirit.”