Speaking to the media, the Speaker said she was trying to make sure that the House functions smoothly with cooperation of all parties. 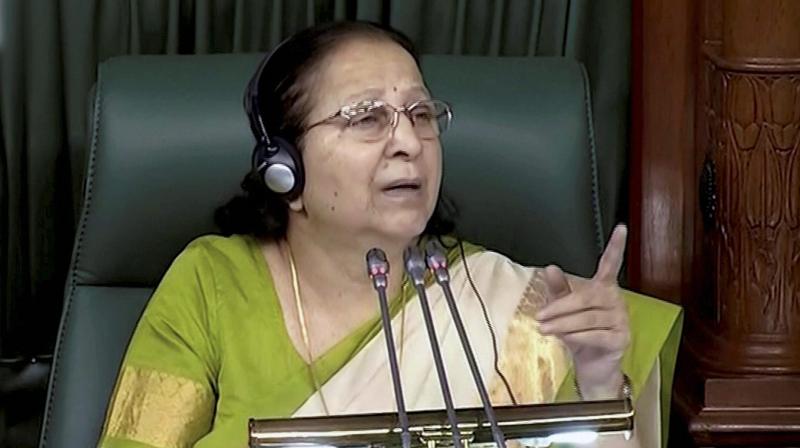 New Delhi: As Lok Sabha proceedings kept repeatedly being disrupted, Speaker Sumitra Mahajan said on Friday said that self-discipline was expected from representatives of people and asserted that it was the responsibility of all to ensure that the House functions properly.

The remarks were made by Ms Mahajan while she was chairing the Lok Sabha’s Rules Committee which deliberated upon the smooth functioning of the house. The Rules Committee acts as an advisory body to her for framing and amending rules for regulating and conducting the business in the Lok Sabha.

Asked if there is any need to initiate disciplinary action against the members who disrupt the House, Ms Mahajan said it was not required in these times. “There is a need for self- discipline”.

“I believe that on 27th, the House will function smoothly,” Ms Mahajan said referring to Congress leader Mallikarjun Kharge’s remarks that his party is ready to discuss the Triple Talaq Bill on December 27.

In a meeting with leaders of all parties on Thursday, Ms Mahajan is said to have conveyed her displeasure over continuous disruptions in functioning of the Lower House of Parliament.

Proceedings of the Lower House had been disrupted for the seventh consecutive day on Thursday amid sparring between members of various parties. On Friday too, Lok Sabha proceedings were disrupted as AIADMK, TDP and Congress members protested over various issues, with the Speaker adjourning the House for the day.