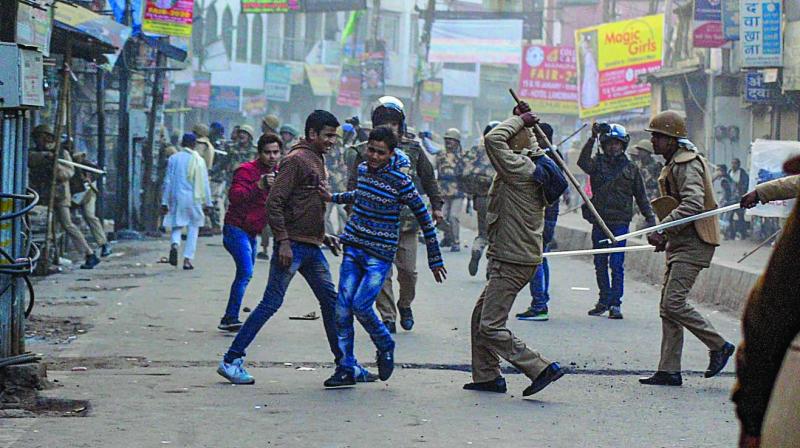 Police personnel baton charge protesters during a rally against the Citizenship Amendment Act in Kanpur on Saturday. (Photo: PTI)

New Delhi: Even as the death toll in Uttar Pradesh protests against CAA and NRC rose to 16 on Saturday, protests intensified in the BJP-ruled state and continued in other parts of the country. Though most protests remained peaceful, protesters clashing with police and incidents of arson were reported from parts of Uttar Pradesh, Bihar, Chennai and Karnataka.

Among the dead in Uttar Pradesh is an 8-year-old boy and two policemen.

Several policemen and protesters were injured during stone-pelting and arson in Uttar Pradesh’s Rampur and Kanpur and parts of Bihar on Saturday as protesters clashed with the police to express their anger against the Citizenship Amendment Act (CAA) and the proposed nation-wide National Register of Citizens (NRC).

In Kanpur, a mob torched a police post while large-scale vandalism and disruption of rail and road traffic were witnessed in Bihar during a bandh called by the Rashtriya Janata Dal.

Of the total 75 districts in UP, in at least one-fourth Internet services have been snapped. The 17 districts without net connectivity include Lucknow whose inspector general of police Praveen Kumar was quoted by media as saying 705 people have been arrested in the state capital, though around 4,500 people were released after preventive detention. “Fifteen casualties have happened, and 263 police personnel were injured of which 57 personnel received fire arm injuries,” he said. According to officials, four deaths were reported from Meerut district and two from Kanpur and the 8-year-old boy was killed in a stampede in Varanasi when a mob was being chased by policemen. Two people lost their lives in Bijnor and one each in Sambhal and Firozabad. One death was also reported from Rampur.

UP police chief blamed “outsiders” for the violence, adding “members of political parties and NGOs could also have been present”.

In Rampur, around 400 to 500 protestors, including children in the age group of 12-18 years, gathered at some distance from the Eidgah and pelted stones at policemen, officials said. Rampur DM Aunjaneya Singh told news agency PTI that he suspected the involvement of some non-locals in the protest and said police did not open fire anywhere yet one protestor had a gunshot injury.

After a lull of four days, Aligarh Muslim University campus again witnessed protests on Saturday with hundreds of AMU non-teaching staff joining hands with the university’s teachers’ association to protest against the CAA and “police atrocities” against the agitators in various parts of the state on Friday.

In Bihar, trains were stopped and many incidents of arson reported. The protests in the state were led by the Rashtriya Janata Dal (RJD) which had called a Bihar Bandh. RJD leader Tejaswi Yadav addressed a massive gathering in Patna standing on his car’s bonnet and asked people not to resort to violence. However, RJD cadre were seen stopping traffic and shutting shops in various parts of the state to enforce the bandh. Journalists were also roughed up.

More than one dozen people and several policemen were injured during clashes between pro and anti-CAA groups in Patna. Violence was also reported from Aurangabad, Muzzafarpur, Bhagalpur and Nawada. The police at several places had to fire in the air and use tear gas to control crowds.

In Delhi, a district court ordered two days judicial custody for the 15 youths arrested during violence at Darya Ganj last night. It is claimed that among these one is a juvenile. Family members of those arrested claimed they were not allowed to meet their kin.

Protests at Delhi’s Jamia Milia, Rajghat, India Gate and UP Bhawan were peaceful even though Old Delhi, that was the centre of violence on Friday, remained tense while heavy police deployment remained in place in Seemapuri. People in Darya Ganj area blamed police for Friday’s violence and said they have videos showing police pelting stones from rooftops to instigate the crowd.

“It was all very peaceful yesterday. People were returning home, but then suddenly there was stone pelting and everyone starting running as police came charging with batons. We then heard that a vehicle was burnt outside Darya Ganj police station. However, none of the protesters were involved in violence. It is the handiwork of police to discredit the movement,” said Salim, Vishal, Umesh and Rajni who were present during Friday protests in the area.

The Delhi Police  detained four students of Aligarh Muslim University protesting outside UP Bhawan in Chanakyapuri against alleged police atrocities against the students and against the CAA and NRC.

In Murshidabad district on Saturday, the police arrested five persons, wearing skullcaps and lungis, when they were trying to recreate and video-record a scene of an attack on an empty train. The accused pelted stones on a train on trial run near Lalbagh railway station and video-recorded the purported “attack”, a senior police officer said on Saturday. Here, railway stations and trains were torched in protest against the amended citizenship law on Friday.

“Local people caught the accused and handed them over to us. Subsequently, they have been arrested,” a police official said. The accused were locally known as activists of the Akhil Bharatiya Vidhyarthi Parishad (ABVP), the students wing of RSS, police claimed.

Meanwhile, Congress general secretary Priyanka Gandhi Vadra accused the BJP government of using dictatorial measures to suppress the voice of people as she condemned the arrest of students, intellectuals, journalists and social workers protesting against the Citizenship (Amendment) Act and NRC.

“The NRC and the new citizenship law are against the Constitution of India. The people of the country would not allow any such attack on the Constitution but the government was bent upon using force and violence against protesters,” she said.