Violence breaks out in Bihar over CAA 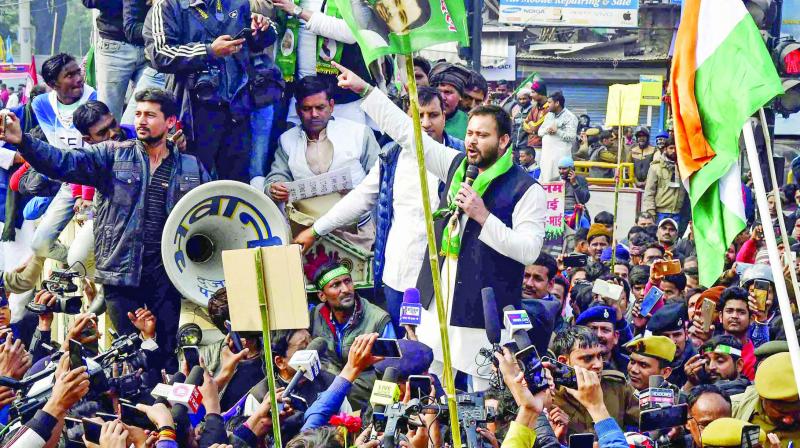 Patna: Violent protests were witnessed in Patna and other districts of Bihar during a day-long bandh called by the RJD against the controversial Citizenship Amendment Act (CAA) and the National Register of Citizens (NRC).

Angry protesters demanded scrapping of the CAA and vandalised private and commercial vehicles in Patna and other districts of the state. In some districts, including Patna, protesters also disrupted rail routes.

In Darbhanga and Vaishali, RJD supporters took off their shirts and used buffaloes to block the highway.  The protesters also blocked the Mahatma Gandhi road bridge over the Ganga which connects Patna to North Bihar.

The bandh called by the RJD on Saturday was supported by around five opposition parties including the Congress.

RJD leader Tejashwi Yadav who led the protest march from his party’s headquarter to Dak Bungalow intersection in Patna during the bandh slammed the NDA, especially JD(U) president and Bihar chief minister Nitish Kumar for supporting the Citizenship Amendment Bill (CAB) in the parliament.

“I salute the Jamia students for raising their voice aggressively against the Citizenship Amendm-ent Act which is unconstitutional and against humanity. This Act has exposed the divisive character of the BJP”.  RJD leader Tejashwi Yadav said while addressing his supporters during the bandh on Saturday.

While opposing the proposed NRC, he had earlier said that the people’s document often gets washed away during floods in states like Bihar and hence it won’t be easy for them to prove their identity if the government demands it.

Taking a dig at the Bihar chief minister for refusing to implement the NRC in Bihar, Rashtriya Lok Samta Party chief Upendra Kushwaha , “State governments won’t be able to stop the NRC exercise if the Centre decides to implement it. “If Nitish Kumar is saying this, then he is only misleading people of the state of Bihar for his own political gains.”

The BJP led government at the Centre has been hinting that NRC would be implemented across the country in due time”.

Terming the bandh successful RJD vice president Raghuvansh Prasad Singh said that “our state-wide agitation is being supported by the people of Bihar and I assure them that we will continue to raise our voices against the controversial Citizenship Act”.