The Union minister said that a total of 59 road works at a cost of Rs 17,617 crore have been sanctioned for Telangana in the last six years 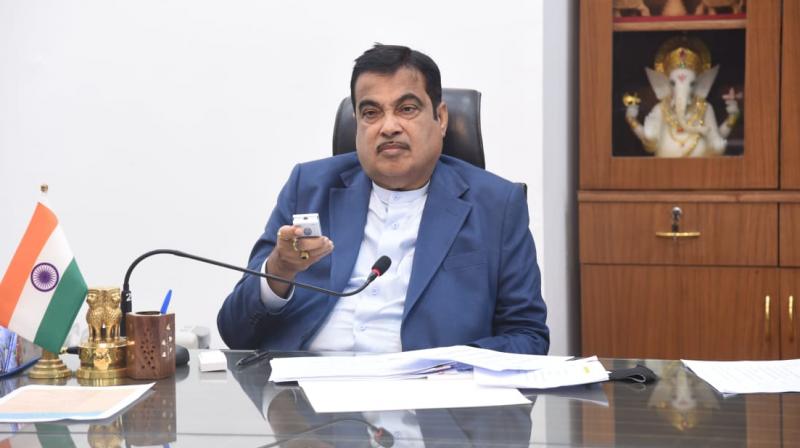 The minister said that there has been a phenomenal growth of 55.71 percent national highway length in the last six years in the state (Photo credit:Twitter)

Hyderabad: Union minister for road transport and highways Nitin Gadkari on Monday laid the foundation stone for 14 National Highway projects worth over Rs 13,169 crore in the state through a virtual mode.

These projects are for a total length of 765.66 km of highways in which eight projects account for a budget of Rs. 9, 452 crore and six projects covering 370 km length cost Rs 3, 717 crore, the minister explained. Gadkari dedicated six projects to the nation.

Speaking on the occasion, the Union minister said that a total of 59 road works with an approved length of 1,918 km and a cost of Rs 17,617 crore have been sanctioned for Telangana in the last six years. Of this, 1,782 km length has already been sanctioned with a cost of 15,689 crore.
He said, almost all of the 33 districts in the state have connectivity with national highways. The remaining district Peddapally will also be connected to the network soon, he added.

The minister said that there has been a phenomenal growth of 55.71 percent national highway length in the last six years in the state and nearly 1400 km have been added during this period.

He said that while construction of 841 km roads worth Rs 4,793 crore has been completed since 2014-15 and works were going on for another 809 km at a cost of Rs13,012 crore. He announced that 14 projects with a length 1,730 km have been identified in Telangana for development under Bharatmala Project. Of them, nine projects with a length of 423 km have been awarded at a cost of Rs 7,400 crore.
He said “development of greenfield and access-controlled corridors have also been planned in Telangana to ease-out traffic on existing corridors, reduce travel time and costs and also provide a boost to the economy. These include Surat, Ahmadnagar, Solapur, Kurnool, Chennai (75 km length in Telangana), Suryapet – Khammam – Devarapalli (164 km length in Telangana) and Indore – Hyderabad (136 km length in Telangana).

The Union Minister explained that three major projects for 192 km worth Rs 2,339 crore are in the bidding process and another 21 National Highway works with a total length of 1,422 km and a total cost of Rs 27,116 crore are under various stages of DPR (detailed project report) preparation. He said that these works are likely to be completed by the financial year 2024-25.

He appealed to the state government to take up diversification of agriculture into economic productivity. He said the country is already over-producing sugar and rice, and sufficient stock is available with the government.

“The surplus crop may be converted to ethanol, which can be used as an alternative fuel for vehicles. This will not only improve farmers’ income but will also be an indigenous source of fuel for the country,” he added.