The police acted on a tip-off from Haryana Gau Raksha Dal, who got information that the accused were travelling towards Delhi with beef. 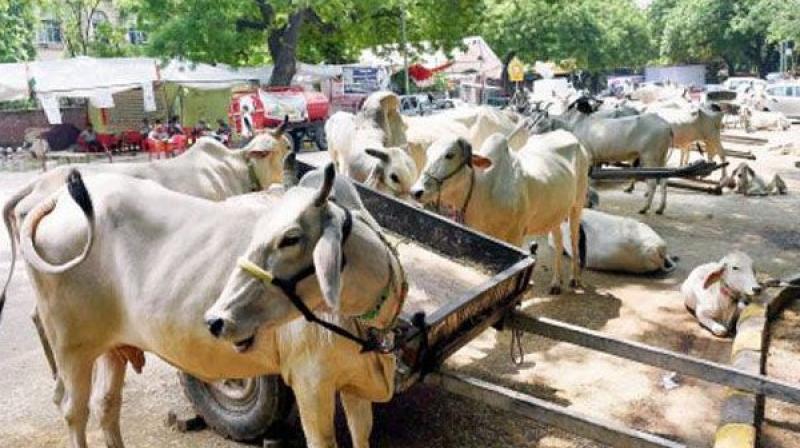 The Dal members informed the police that while a Hyundai Accent car was carrying the ‘beef’, a white Santro car was escorting it. (Photo: PTI/Representational)

Gurgaon: Gurgaon police on Saturday arrested two persons carrying 900 kilograms of meat in a car, and claimed the meat was beef.

According to a report in the Hindustan Times, the police acted on a tip-off from Haryana Gau Raksha Dal, who got information that the accused were travelling from Mewat towards Delhi via Sohna Road carrying ‘beef’.

The Dal members informed the police that while a Hyundai Accent car was carrying the ‘beef’, a white Santro car was escorting it.

The police installed barricades at Sohna Road and signalled the Santro to stop when it arrived. However, the driver tried to reverse the car and flee, said the report.

While two occupants of the car managed to flee, one Hasan Mohammad, a resident of Nagina in Mewat, was nabbed.

Hasan confessed to the police that the Accent car, which was following the Santro, was carrying beef.

A little while later, a white Accent car reached the spot and was stopped. The police arrested the Accent’s driver. He was identified as Jumma, a resident of Nagina in Mewat and meat stuffed in the trunk, near the rear seat, and front passenger seat was recovered.

A veterinarian was called for examination of the meat, and on his observation that it was likely to be beef, a sample was sent to a laboratory in Hisar. The lab reports are now awaited, said the report.

Cow vigilantism has emerged as a problem in recent times, with Gau Rakshak groups indulging in violence against those accused of carrying or eating beef. On June 10, two men nabbed for smuggling beef in a car were beaten by cow vigilantes and forced to eat cow dung near Badarpur border on Kundli-Manesar-Palwal expressway.

Later last year, Dalit men in Una of Gujarat were stripped and thrashed in public for carrying beef.