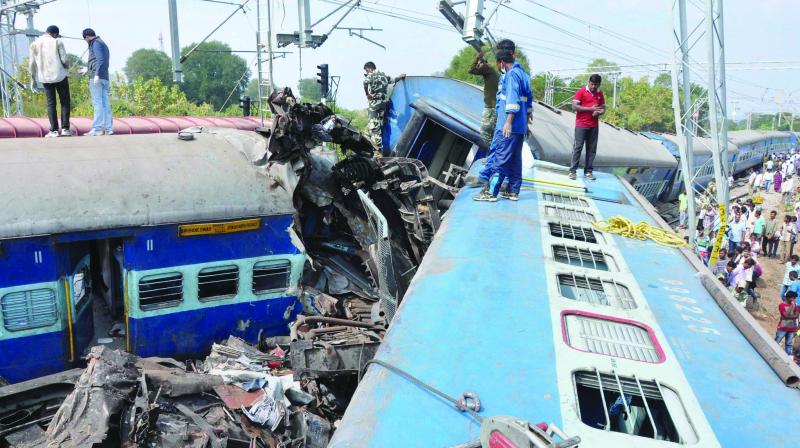 Rescue and relief work in progress at the site where Jagdalpur-Bhubaneswar Express derailed near Kuneru station in Vizianagaram district of Andra Pradesh. (Photo: PTI)

Rayagada (Odisha)/ Visakhapatnam: At least 40 persons were killed and around 50 injured, some of them seriously, when the Bhubaneswar-bound Jadgadalpur-Hirakhand Express derailed at about 11.15 pm on Saturday at Koneru in Andhra Pradesh, 24 km from here.

Seven coaches — a luggage van, two general compartments, two sleeper coaches, one AC three-tier coach and one AC two-tier coach — and the engine derailed and rammed into a stationary goods train on the adjacent track.

The reason behind the incident was yet to be ascertained, East Coast Railway (ECoR) chief public relations officer J.P. Mishra said on Sunday.

“There are indications of foul play as a goods train passed the same track just two hours before the mishap. The inspection by the patrol team also found the track okay yesterday,” Railway spokesperson Anil Saxena said.

However, Odisha director general of police K.B. Singh ruled out the possible involvement of Naxals in the accident in the Maoist-infested Vizianag-aram district.

With the Railways suspecting sabotage, the home ministry may ask the NIA to include the incident in its ongoing probe into possible role of Pakistan spy agency ISI in Indore-Patna Express mishap in 2016.

Much of the debate revolves around a 15-inch gap in the rails. ECoR general manager Umesh Singh, who visited the accident spot, said he had never seen such a huge gap in a railway track. Officials believe this crack is responsible for the crash.

A goods train passed through at 9.05 pm on Saturday and the track supervisor inspected the Kuneru section at 10.45 pm and found nothing unusual. Another goods train arrived at Kuneru station on the same track at 10.52 pm and was moved to another track to allow the Hirakhand Express to pass. The mishap took place between 11.15 pm and 11.20 pm.

Five units of National Disaster Response Force (NDRF) and two units of Odisha Disaster Rapid Action Force (ODRAF) were pressed into rescue and relief operations as some passengers were feared trapped inside the mangled coaches.

The injured passengers were admitted to hospitals in Visakhapatnam and Parvatiparam in Andhra Pradesh and Rayagada in Odisha. Railway minister Suresh Prabhu visited the accident site and the injured patients at Rayagada hospital. “We are investigating the cause of the accident. Stringent action will be taken against those responsible for it,” he said.

While Mr Prabhu announced Rs 2 lakh each for the next of kin of the deceased, and Rs 50,000 and Rs 25,000 respectively for the seriously- and partially-injured passengers, Odisha chief minister Naveen Patnaik said an ex-gratia of Rs 5 lakh each for the victims’ families.