The Jallikattu held in Rapoosal village in Pudukkottai district claimed two lives as the government organised the event in a hurry. 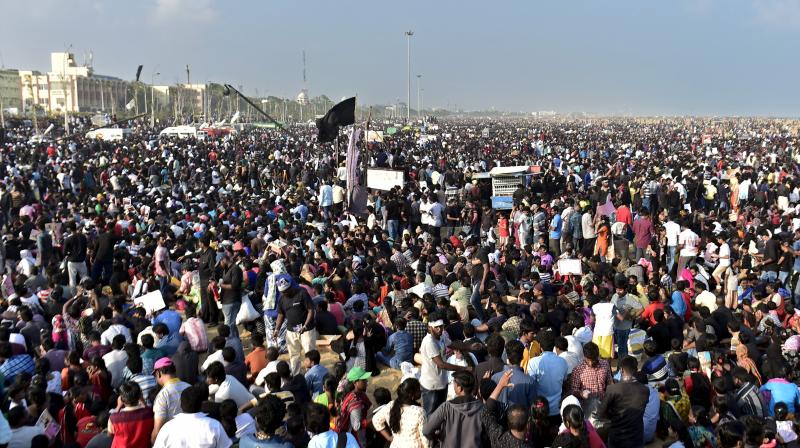 Youngstres and Students during the protest to Lift ban on jallikattu and impose ban on PETA, at Marina Beach in Chennai. (Photo: PTI)

Chennai: Jallikattu, the rural sport held as part of Pongal festivities in Tamil Nadu, was held in several places across the state after a gap of three years. However, Alanganallur, the traditional venue hosting the event for decades, skipped it after protesters refused to vacate the village.

Protesters in Alanganallur even went to the extent of squatting outside the “vaadi vaasal” (the traditional entrance through which bulls enter the Jallikattu track), forcing chief minister O. Panneerselvam, who was to inaugurate the event, to return empty-handed.

Jallikattu was back courtesy an ordinance by the Tamil Nadu government making a state-specific amendment to the Prevention of Cruelty to Animals Act, but protests at the Marina Beach and elsewhere in the state continued for the seventh straight day with agitators refusing to budge from their stand demanding a “permanent solution.”

Mr Panneerselvam reiterated that the ordinance once replaced with a law during the Assembly session beginning Monday will be the “permanent solution” for Jallikattu and declared, “Nobody on Earth can stop Jallikattu from happening in Tamil Nadu.” The Jallikattu held in Rapoosal village in Pudukkottai district claimed two lives as the government organised the event in a hurry and even failed to erect barricades at the venue where the event was held. Television visuals showed Jallikattu being held without any proper barricading, which has been mandated in the ordinance promulgated by governor on Saturday. In Madurai, 48-year-old Chandramohan, from Jaihindpuram, died due to dehydration after protesting for the past few days.

In the evening, leading Jallikattu campaigner Karthikeyan Sivasenapathy asked the protesters to postpone the agitation till March 31 this year so as to give two months time for the Union and state governments to fulfil their promises. “We respect and worship the agitation. But I think it would be good if the agitation is postponed for two months and revive it if the need arises – if the governments do not keep up their word,” he said.

At the Marina Beach, the epicenter of the protest which began on Tuesday, protesters continued their agitation, but differences cropped up between them with the original authors of the agitation expressing helplessness saying “fringe elements” are trying to dictate the agenda.

Hip-hop Tamizha Adhi, a popular singer who was one of the brains behind the agitation, took to social media to express displeasure over the agitation taking a different turn. He said slogans against Republic Day and those targeting the Prime Minister were causing discomfort to them.