In view of the violence, TN Guv has said a bill to replace the ordinance would be placed by AIADMK govt in the Assembly in 'immediately'. 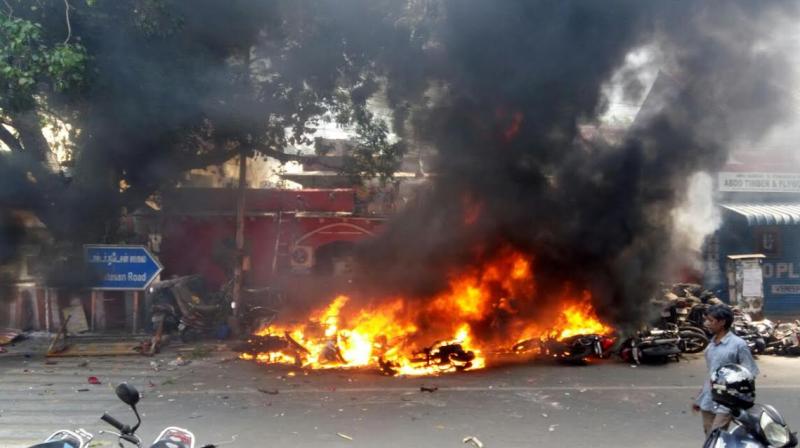 Supporters of Jallikattu set fire at Ice House Police Station near Marina Beach in Chennai. Vehicles were also set on fire, Chennai Police had to finally step in and disperse the protesters.

Injured protestors have been rushed to hospital for treatment

Following an advisory, the crackdown comes on a day when the state Assembly is expected to discuss the matter after the customary Governor's address.

DMK staged a walkout as soon as the Tamil Nadu Governor began his address in the state Assembly on Monday.

DMK Working President MK Stalin criticised the police action on protesters at Marina beach demanding lifting of the ban on Jallikattu and a permanent solution for holding it.

"It is condemnable that instead of holding talks with peaceful protesters, it has been attempted to end protests using police with an authoritarian mindset," Stalin, opposition leader in the state assembly, said in a statement.

He also dubbed the action as "anti-democratic."

TV visuals showed men and women in khaki physically removing the protesters, most of them clad in black, from the sands of the famous beach here, signalling the end of the week-long protests that had been backed by political parties including ruling AIADMK and DMK.

A large posse of cops was deployed at Marina. The protesters, mostly students and youth, had not bought the government decision to issue an ordinance for holding Jallikattu, which was done on Saturday, and the bull taming sport held in some parts of the state.

They had vowed to carry on with their protest till a permanent solution was found to ensure the sport was held annually without any hindrance.

Senior police officials could not be reached. The protesters criticised the police crackdown at the beach.

The police action, however, came following an early morning 'advisory' asking the agitators to end their 'disciplined and peaceful' protest as their "purpose has been fully achieve."

The advisory, released to the media, said that tens of thousands of youth, students and general public had been protesting in Marina since January 17 urging to lift the ban on the conduct of Jallikattu in Tamil Nadu and that it had been "staged in a disciplined and peaceful manner without causing inconvenience to the general public and hindrance to the traffic."

"In fact the participants have been assisting the police throughout and have cooperated well in the maintenance of Law and Order and regulation of traffic.”

"The Government of Tamil Nadu has taken every initiative and has conducted Jallikattu yesterday at various places all over Tamil Nadu to fulfil the aspirations of the people of Tamil Nadu," it said.

"Through an exemplary display of unity and discipline, the purpose of the protest has been fully achieved. Hence the participants are requested to leave the Marina in the same peaceful and disciplined manner and co-operate with the Chennai City Police," it said.

Several protestors were also seen threatening the police, saying they will commit suicide at the beach if forcefully removed from the site.

Yesterday, protesters in Alanganallur did not allow Chief Minister O. Panneerselvam to inaugurate the Alanganallur Jallikattu, which was later cancelled.

Talking to mediapersons, the Chief Minister said that even though Jallikattu was not held at Alanganallur, it was organised smoothly in many other places across the state.

After the Governor's address to the Assembly today, the government is expected to move a bill to amend the Prevention of Cruelty to Animals Act, 1960.

Observing that a “mass movement” and "spontaneous outpouring of emotion" paved the way for lifting of the ban on Jallikattu, Tamil Nadu Governor Ch Vidyasagar Rao today said a bill to replace the ordinance would be "placed" by the state government in the Tamil Nadu Assembly "immediately."

"The unprecedented and spontaneous outpouring of emotion and sentiment in a completely orderly and peaceful manner by lakhs of youth, supported by common people across the state, has received the solidarity of Tamil people across the globe to conduct Jallikatu and preserve Tamil cultural heritage," he said, even as the opposition DMK staged a walkout.

In his maiden address to the Assembly in its first session this calendar year, Rao said, "This mass movement has paved the way for lifting the ban on Jallikattu."

"Considering the situation, the bill will be moved when the House meets at 5 pm today," Assembly Speaker P Dhanpal told reporters in Chennai.