Jallikattu row: Centre says it is 'mulling' to ban PETA

PETA, an NGO funded by foreign nations, always rake up these issues. We will see as to what can be done, Environment Minister said. 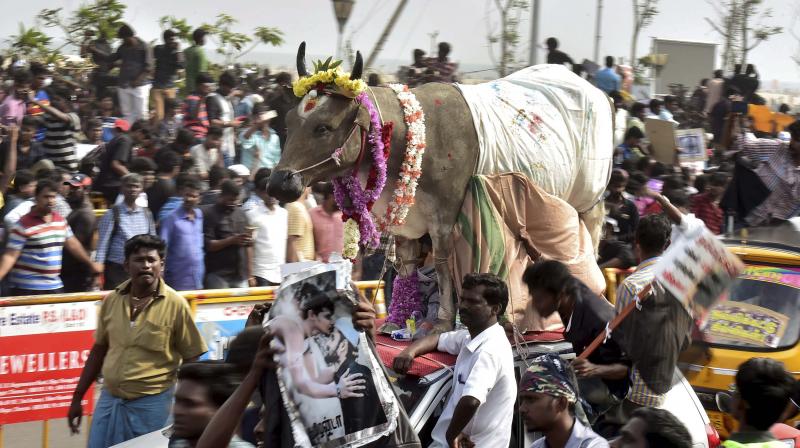 Youngsters and students participate in a protest to lift the ban on Jallikattu and impose ban on PETA, at Kamarajar Salai, Marina Beach in Chennai. (Photo: PTI/File)

Bhopal: Amidst a growing call for the ban on the People for the Ethical Treatment of Animals (PETA) by the people of Tamil Nadu for opposing Jallikattu, Environment Minister Anil Dave on Saturday said it is mulling to consider on the same.

When asked whether the Centre will ban the animal rights organisation after the people of Tamil Nadu hold them accountable for the ban, Dave said, "PETA, is an NGO, funded by foreign countries. They always rake up these issues. We will see as to what can be done."

Dave further hoped that the bull-taming sport will be conducted in a peaceful manner after the ordinance was cleared by Tamil Nadu Governor Ch. Vidyasagar.

"The permission has been given. And Jallikattu should be conducted within the parameters of law. It should be done peacefully, which I believe will happen," he said.

The ruling All India Anna Dravida Munnetra Kahagaham (AIADMK) has been demanding a ban on PETA with its general secretary Sasikala Natrajan leading the chorus.

He sought a ban on the NGO which has been stridently opposing the bull-taming festival Jallikattu.

The Ordinance allowing Jallikattu to take place was brought in by the Tamil Nadu Government after four days of protests. It received the Governor's approval today.

The traditional and popular bull-taming sport will be held in three places in Tamil Nadu's Madurai district on Sunday morning.

The ordinance was promulgated to amend the Prevention of Cruelty to Animals Act, 1960.