Wrap-up: Taking the bull by the horns 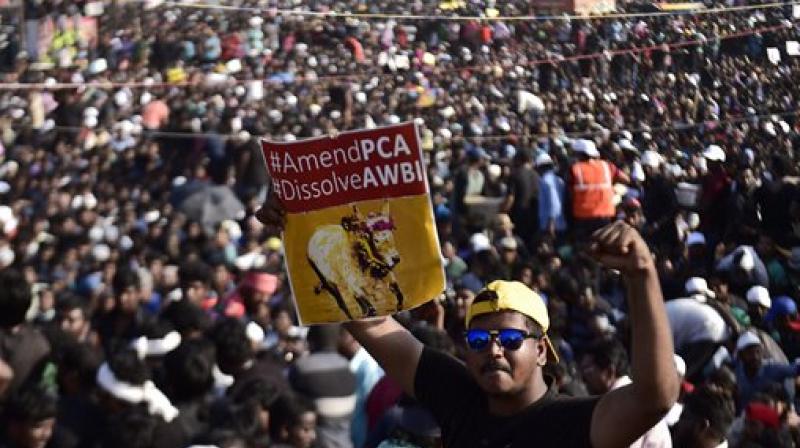 Youngstres and Students during the protest to Lift ban on jallikattu and impose ban on PETA, at Kamarajar Salai, Marina Beach in Chennai on Saturday. (Photo: PTI)

Decks were cleared on Friday for an ordinance on Jallikattu after Tamil Nadu and the Centre worked feverishly even as the state stood on the edge and protesters on Marina beach in Chennai refused to relent until the sport is held.

On Saturday, Tamil Nadu Governor Ch. Vidyasagar Rao appr-oved the jallikattu ordinance and the bull taming sport will be held at Alaganallur in Madurai and other parts of the state on Sunday, Chief Minister O. Panne-erselvam annou-nced. The Chief Minister will inaugurate jallikattu at Alanganallur, famous for conducting the rural sport.

Earlier this week, Tamil Nadu was brought to a standstill by a shutdown due the protest by youth and other sections demanding immediate staging of the traditional bull-taming sport in Alanganallur and other places. The Tamil film industry also expressed solidarity with Jallikattu supporters, with top actors and actresses joining a silent protest. Film shootings were suspended for the day.

Superstar Rajinikanth, actors Ajit Kumar, Surya, Siva Karthikeyan besides actress Trisha, who had faced flak from the pro-Jallikattu groups for her perceived opposition to the sport by reportedly being associated with PETA, joined the silent protest.

All you wanted to know about Jallikattu
What is Jallikattu?
Jallikattu (or Sallikkattu) is a sport in which a bull is released into a crowd of people. Unlike in traditional Spanish bullfighting, the animals are let loose into open fields where youth compete to subdue them bare-handed.

What is the issue?
Supreme Court outlawed the Jallikattu festival last year after a plea by animal rights groups, which have long accused participants in the event of cruelty to the animals.

Critics’ refrain
Critics say that organisers lace the bulls’ feed with liquor to make them less steady on their feet and throw chilli powder in their faces to send them into a sudden frenzy.

Current status
PM Narendra Modi has overturned the SC ban on jallikattu that fuelled massive protests in Tamil Nadu by demonstrators who called it an attack on their culture.

Organisers’ stand
Organisers of the centuries-old and popular bull-taming sport insist the animals suffer no harm, calling the event an established part of Tamil culture.

For sure one can not have a situation wherein scores and scores of people bring an entire city to a standstill demanding something.  Thankfully, the protests were peaceful. However, achieving something which has been banned by law through coercive means is also wrong. When the Supreme Court banned the bull-taming sport, it must have weighed all the pros and cons. There were not much protests back then. What is surprising is that bulk of the protests took place in Chennai and other parts of Tamil Nadu after the festival of Pongal, the day on which the sport is traditionally organised.