Every bagh can be Shaheen Bagh: Azad 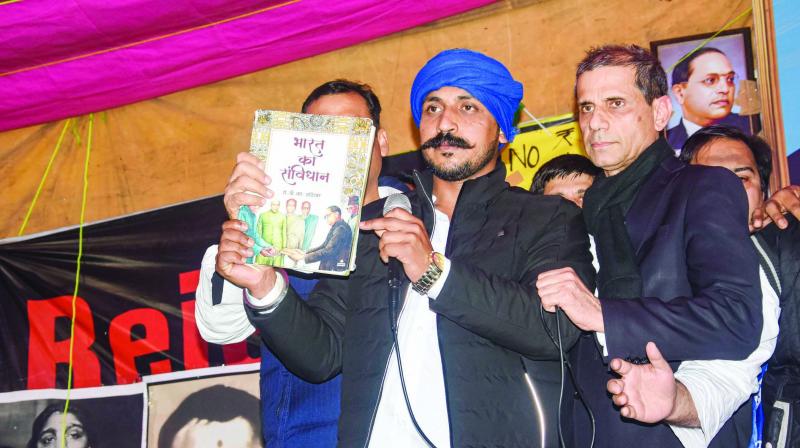 Bhim Army chief Chandrasekhar Azad holds a copy of the Constitution during the ongoing protest against the NRC and CAA at Shaheen Bagh in New Delhi on Wednesday. (Photo: PTI)

NEW DELHI: A day after a Delhi court allowed him to visit the national capital, Bhim Army chief Chandrashekhar Azad on Wednesday turned up at Shaheen Bagh where hundreds of  people have been protesting for over a month against the Citizenship Amendment Act.

Before going to Shaheen Bagh, he visited the continuing protest outside Jamia Millia Islamia wh-ere he was welcomed by protesting students with loud cheer and slogans.

The last time Mr Azad was at Jamia was on the night of December 15, when the Delhi police brutally attacked the university campus.

Wearing his signature white shirt and blue shawl, with a copy of the Constitution of India in his hand,  Mr Azad said: “Humare bhaiyon pe jo laathi padi hai, hum bhoole nahi hain (We haven’t forgotten the lathi blows which fell on our brothers).”

“Kabhi behno ke peeche bhi khade ho kar sangharsh karna seekho (At times, learn to fight standing behind your sisters),” he advised his “protesting brothers” and added, “Every Bagh can be Shaheen Bagh.”

Mr Azad said: “PM ko teen talaq ki awaz sunai di, but hamari behno ki ye awaaz unhe nahi sunayi de rahi hai (PM Modi was all ears when it came to triple talaq, but he is conveniently deaf to the nationwide protests).” He added that the Wazir-e-Azam (PM) shouldn’t forget that he owes his position and power to the Constitution.

“The NRC, NPR and CAA are anti-Dalit. They are also anti-OBC and anti-tribal because these people will suffer the most,” he said.

In the next 10 days, there will be 5,000 more protest sites like Shaheen Bagh across the country, Mr Azad said on Wednesday evening as he reached the iconic demonstration spot in south Delhi to extend his support to the women protesting against CAA and NRC.

Earlier, the Bhim Army chief had urged his supporters to vote against the BJP in the February 8 Delhi Assembly election.

On the ongoing protests at Shaheen Bagh, the police said that it will take appropriate action if a complaint is received about any obstruction in the ongoing electoral process. Special commissioner of police (election) Praveer Ranjan said they have not yet received any complaint about protesters in Shaheen Bagh causing obstruction in the electoral process.