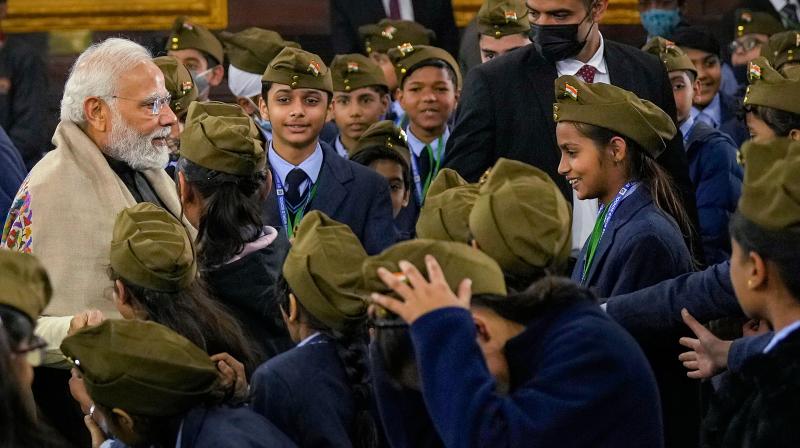 NEW DELHI: Prime Minister Narendra Modi on Monday virtually unveiled the model of a proposed memorial dedicated to Netaji Subhas Chandra Bose, to be set up in Andaman and Nicobar Islands, and said it will infuse feelings of patriotism among people.

The Prime Minister also named 21 islands of the Union territory after Param Vir Chakra awardees on the occasion of Netaji’s 126th birth anniversary.

The ministry of home affairs (MHA), meanwhile, announced the Subhas Chandra Bose Rashtriya Aapda Prabandhan award for 2023. This annual award was instituted to recognise and honour the invaluable contribution and selfless service rendered by individuals and organisations in India in the field of disaster management.
Mr Modi said, “Today, it is a proud moment for me as I address the people of Andamans because this is the land where Subhas Chandra Bose unfurled the national flag for the first time in 1943.”

The freedom fighter had hoisted the tricolour in the archipelago on December 30, 1943.

“It gives me immense pleasure to announce the naming of 21 islands after Param Vir Chakra awardees and to inaugurate the model of a proposed memorial at Netaji Subhas Chandra Bose Island (previously known as Ross Island). One should see the naming of 21 islands as ‘Ek Bharat Shreshtha Bharat’ and the memorial will infuse feelings of patriotism in the hearts of people,” the Prime Minister said.

He said that attempts were made to “downplay” Netaji’s contribution to the freedom movement, but the entire country is paying tribute to the great hero today, preserving the history and heritage associated with him.

“Attempt was made to suppress Netaji's contribution towards the freedom struggle, but the entire nation is remembering him today. Netaji will be remembered for his fierce resistance to the colonial rule. I am deeply influenced by his thoughts,” Mr Modi said.
The Prime Minister pointed out that the demands to make Netaji’s files public were made by many for a long time, and it was his government which eventually declassified the files.

“There were demands to make Netaji’s secret files public and we did so while respecting his sacrifice for the country,” he said.

The proposed memorial whose model Mr Modi inaugurated during the day will be set up on Ross Island, which had been renamed as Netaji Subhash Chandra Bose Dweep in 2018. Neil Island and Havelock Island were also rechristened as Shaheed Dweep and Swaraj Dweep.

Referring to the rechristening of the islands, he also stated that these islands were earlier associated with signs of slavery.

“Therefore, we decided to rename these islands,” he noted.

Highlighting the tourism potential of the archipelago, Mr Modi said that the Centre has identified various opportunities in Andamans in the last eight years, and worked hard to make this place a must-visit for people across the globe.

“Several steps were taken, including laying of optical fibre for better Internet connectivity and many more initiatives will be taken in future... Not only for beautiful beaches, but people are also now visiting Andamans to learn our history (of freedom struggle),” he said.

The memorial will have a museum, a cable car ropeway, a laser-and-sound show, a guided heritage trail through historical buildings and a theme-based children’s amusement park, besides a restro lounge.

Earlier, Union home minister Amit Shah lauded the initiative to christen the 21 islands, and said this effort will be a source of encouragement for the country’s armed forces.

Mr Shah also said that the cellular jail in the Union territory, where many freedom fighters were incarcerated, is no less than a pilgrimage site.