With his financial worsening, Ahirwar, who is a stone-cutter, said he is now finding it difficult to make ends meet. 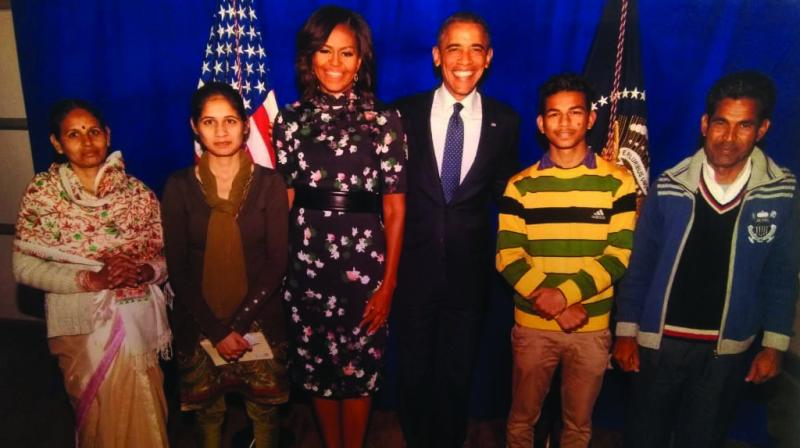 A file photo of Ramdas Ahirwar and his family with Barack Obama and wife Michelle. (Photo: Asian Age)

Hyderabad: It was a ‘Peepli Live’ moment for a Dalit labourer, Ramdas Ahirwar, when the media flocked to him for interviews after he met the then US President Barack Obama and wife Michelle during their first visit to India in December, 2010.

The Obamas showered praises on the Ahirwars, feted them and left with an assurance to help Ahirwar set up a college in his native Katera village near Jhansi in Uttar Pradesh, which he had requested for.

The Obamas returned in January 2015, specifically had the Ahirwars invited and had a lengthy conversation with them. Ramdas Ahirwar once again sought  Obama’s intervention for setting up the  college and even offered his seven-bhiga land for the purpose. Obama then gave his word that he would extend help in the form of a donation for the college.

While the Obamas failed to keep up their word, the Narendra Modi-led Central government — to whom Ahirwar made repeated requests — also ignored him. The then UP chief minister Akhilesh Yadav, who too had showered praises on the Ahirwars, failed to come to his rescue and the Dalit labourer’s dream of having a college in his native, still remains a dream.

With 48 hours to go before Air Force One ferrying US President Donald Trump touches down in India, Ahirwar gets angry when asked what his expectations are from

Trump’s maiden visit to the country, given the hype surrounding his visit and with the Centre’s PR machinery in an overdrive claiming that Trump’s visit is a big deal for Indians.

“Dono baar (in 2010 and 2015), US embassy ne lambi kaali gadi bheji thi hum ko ghar se pick up karne ke liye....Obamaji aur Michelle ji ne hamari khoob tareef ki aur donation dene ki baat kahi thi... lekin college ka kuch nahi hua. sab bhool gaye (The US embassy sent their car (limousine) to pick us up and showered praises on us but all of them forgot about the college),” he recalls while speaking to this newspaper over telephone from New Delhi.

With his financial worsening, Ahirwar, who is a stone-cutter, said he is now finding it difficult to make ends meet.

Ahirwar has kept the souvenirs he had received from Obama, which he once threatened to return, in his attempt to draw Obama’s attention to the plight of poor parents who cannot afford primary education for their children.

“I wanted to return them as I was tired of writing to the Modi government seeking their intervention to construct the college in UP. In fact it was Obamaji who suggested back then that I pursue the matter with the Centre. But Modiji too did not bother,” Ahirwar said, while working on the construction of a ‘nala’ (drain) in a slum in Delhi.

Though the former United States President may not have helped him setting up the college and he does not expect any help either from the Trumps, Ahirwar said he has a “direct connection” with the White House.

“I had gifted Obamaji a photo of Mahakal in Ujjain during my last interaction with him, which lasted 23 minutes. The US authorities informed me that the photo adorns the walls of the White House.”

Interestingly, Ahirwar’s son Vishal met Obama during his visit to India in 2017, when he was no longer the President, and requested him for a job here. He is still unemployed.