India   All India  23 Feb 2021  Modi calls upon voters to replace 'tustikaran' and 'tolabaji' with 'asol poriborton'
India, All India

Centre gave Rs 1,700 crores to the TMC for water supply to all the households of which the state government spent only Rs 609 crore 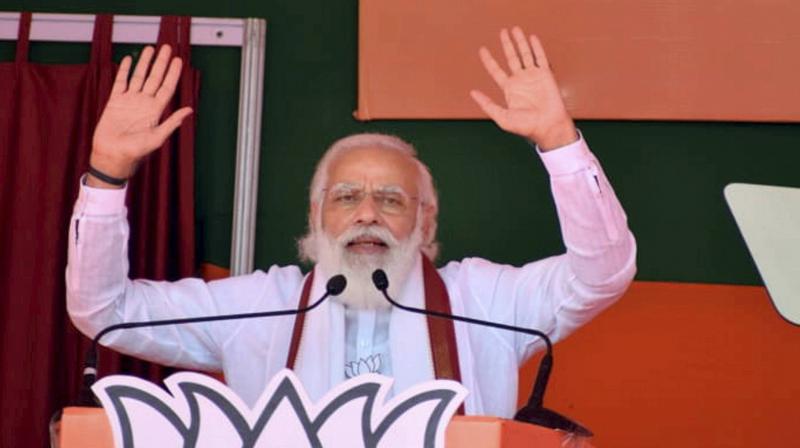 Modi later launched a slew of railway projects at another event in Chinsurah, where chief minister Mamata Banerjee was absent, though she was invited. — PTI

Kolkata: Pitching for the BJP to come to power in West Bengal, Prime Minister Narendra Modi on Monday urged people to let the kamal (lotus) bloom in the coming Assembly election to bring asol poriborton (real change) which will replace the evils of the “syndicate raj through cut money”, tustikaran (appeasement) and tolabaji (extortion) culture of the ruling Trinamul Congress with the all-round development of the state.

“A BJP government has to be formed in Bengal not only for mere poriborton (change) in power but for asol poriborton (real change) here. The lotus needs to bloom here so that asol poriborton, for which our young generation is waiting, is ushered in,” Mr Modi told a massive BJP rally at Chinsurah, Hooghly, on his second trip to the state in two weeks.

Reiterating that the people “have already made up their mind” to oust the TMC from power, he also said the state’s infrastructure development has always been the Centre’s “priority”. Mr Modi gave a fresh example of the state government’s lethargy on implementing yet another Central welfare scheme, after PM Kishan Samman Nidhi and Ayushman Bharat, under chief minister Mamata Banerjee’s rule.

He alleged: “The Jal Jivan Mission has been underway across India to connect households in villages with a pipeline for smooth water supply. It is more important for Bengal because it has over 1.45 crore rural households. You will be shocked to know about the situation they have pushed Bengal into. Out of 1.45 crores, only two lakh rural households have tap water supply. So far 3.60 crore such households have been connected with water supply nationwide. After the Central government put pressure on the state government here, the figure of two lakhs grew to nine lakhs under the scheme. It is not known how many more years will pass in view of the pace at which the state government is working.”

Complaining of corruption by the ruling TMC in the project, Mr Modi claimed: “Shouldn’t the people of Bengal, the poorest of the poor, get to drink pure water? The Central government in Delhi gave more than Rs 1,700 crores to the TMC for water supply to all the households. Out of the amount, the state government spent only Rs 609 crores, hushing up the rest Rs 1,100 crores.”

Mr Modi later launched a slew of railway projects at another event in Chinsurah, where chief minister Mamata Banerjee was absent, though she was invited. This was the second time in a row when the Trinamul Congress supremo, despite being invited, skipped Mr Modi’s event.