The duo was taken into custody by the Crime Branch of Delhi Police on Monday night and shifted to Delhi for questioning, they said 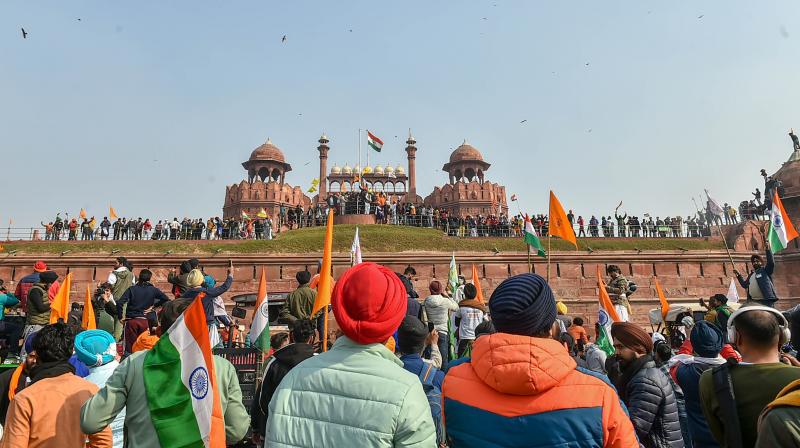 Thousands of protesters had clashed with the police during the tractor parade called by farmer unions on January 26 demanding repeal of the Centre's contentious farm laws. (PTIfile photo/Arun Sharma)

Jammu/New Delhi: The Delhi Police has arrested two people, including a prominent farmer leader, from Jammu for their alleged involvement in the violence at the Red Fort during the farmers' tractor parade on January 26, officials said on Tuesday.

Jammu and Kashmir United Kisan Front Chairman Mohinder Singh (45), a resident of Chatha area of Jammu city, and Mandeep Singh (23), a resident of Gole Gujral, Jammu, were "active participants" and "key conspirators" in the violence at the historic fort, the Delhi Police said.

The duo was taken into custody by the Crime Branch of Delhi Police on Monday night and immediately shifted to the national capital for questioning, they said.

They were apprehended with the support of the Jammu and Kashmir Police, the Delhi Police said.

"As per the information received, both the accused are active participants and key conspirators in the riot at Red Fort," Delhi Police Additional PRO Anil Mittal said.

Thousands of protesters had clashed with the police during the tractor parade called by farmer unions on January 26 demanding repeal of the Centre's contentious farm laws.

Many of the protesters reached the Red Fort driving tractors and entered the monument, and some of them even hoisted religious flags on its domes and a flagstaff at the ramparts.

Mohinder Singh's family, however, claimed that he was innocent and demanded his immediate release.

He (Mohinder Singh) informed me that he was called by the Senior Superintendent of Police (Jammu) and was visiting Gandhi Nagar Police Station before his mobile got switched off. Upon enquiring, I came to know that he was arrested by police and shifted to Delhi, the farmer leader's wife told reporters.

She claimed that her husband was at the Delhi border and not Red Fort when the violence broke out.

He went alone to see the SSP because he was not afraid as he had done nothing wrong, she said.