Karti has been granted bail on a surety of Rs 10 lakh. He cannot travel out of country, cannot influence witnesses or close bank accounts. 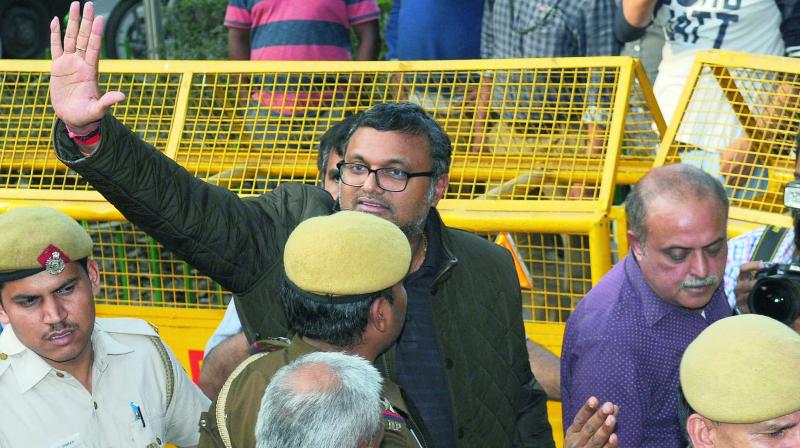 Karti has been granted bail on a surety of Rs 10 lakh. He cannot travel out of the country. Also, he cannot influence witnesses or close bank accounts.

The Supreme Court had last week extended till March 26 the interim relief granted by the Delhi High Court to Karti Chidambaram from arrest in the money laundering case lodged by the Enforcement Directorate (ED).

Karti was arrested by the Central Bureau of Investigation (CBI) from Chennai Airport on Feruary 28.

Karti's name had cropped up in the case which relates to Foreign Investment Promotion Board (FIPB) approval granted in 2007 for receipt of funds by INX Media when his father and senior Congress leader P Chidambaram was the Union finance minister during the previous UPA regime.

The ED had alleged that INX Media had deliberately and in violation of the conditions of the approval made a downstream investment of 26 per cent in the capital of INX News Pvt Ltd without specific approval of FIPB, which included indirect foreign investment by some foreign investors, and generated Rs 305 crore foreign direct investment in INX Media Pvt Ltd against the approved foreign inflow of Rs 4.62 crore.

To wriggle out of the situation without any punitive action, INX Media entered into a criminal conspiracy with Karti, the ED has alleged. The FIPB unit of the finance ministry had not only granted illegal approval but also misinformed the investigation wing of Income Tax Department, it had alleged.