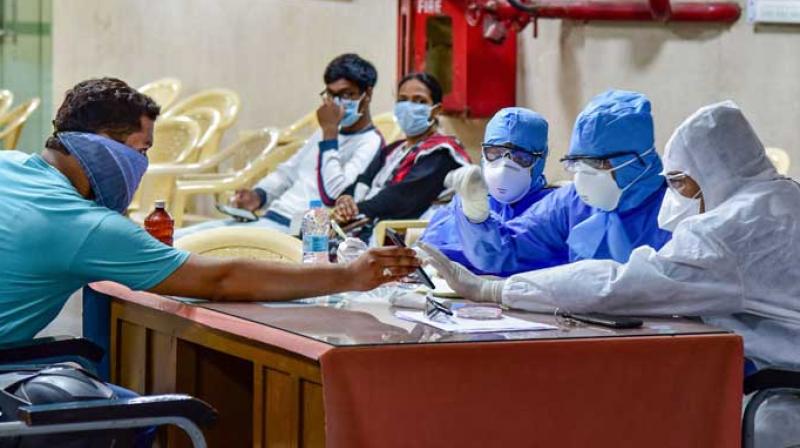 Medics interact with a patient at a help desk set up in view of the coronavirus pandemic. (Photo- PTI)

Vijayawada: A confirmed coronavirus victim of the city has requested people not to spread rumours regarding him and his family. Instead, he sought their support in getting rid of the disease.

This first case of Covid-19 registered in Vijayawada has increased the total number of corona victims in Andhra Pradesh state to five.

The victim released a selfie video on Sunday asserting that he had voluntarily disclosed his coronavirus status and was currently quarantined in an isolation ward. He said once cured, he will work towards bring awareness within masses on coping up with the disease.

The virus victim’s selfie came after he was trolled over social media that he had hidden from authorities information about him contracting coronavirus.

Refuting the same, he said he is a student who returned from Paris to Delhi on March 16 at 9 a.m. He went through the screening at Delhi airport, which cleared him of having any Covid-19 symptoms.

Thereafter, he took a flight and reached Hyderabad on March 17 at 12 noon. From there, he took a private cab to Vijayawada and reached home at 6 p.m.

The same day (March 17), a representative of Vijayawada municipality vigilance wing came to his house and directed him to observe self-quarantine at home for 14 days.

The student said he started honouring the quarantine order.

However, when he developed fever and other symptoms, he called the Covid-19 emergency team, which found that he had contracted coronavirus and shifted him to a government isolation ward.

Lamenting over circulation of rumours about him and his family, he stated he did not hide the status of his health at any point in time. Soon after he realised his ill health, he voluntarily called the emergency health team.

He urged public to emotionally support him in his recovery, post which he would work for spreading awareness among masses about coronavirus.