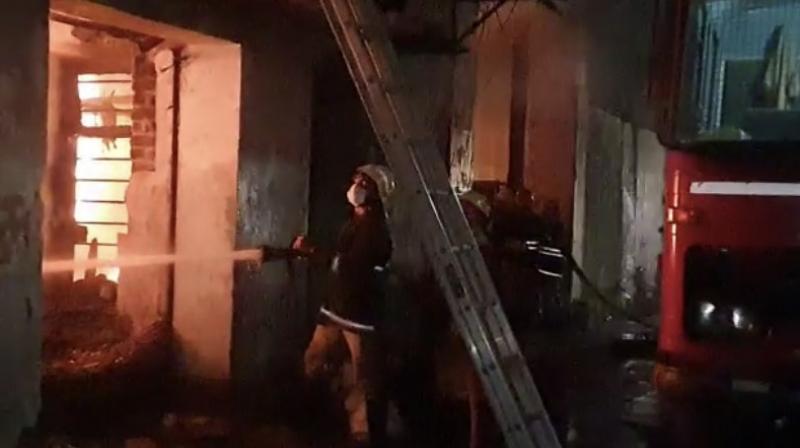 All the men were in one room and most of them died from asphyxiation. (DC)

Hyderabad: As many as 11 individuals were burnt to death in a tragic fire mishap at Bansilalpet of Bhoiguda in the wee hours of Wednesday.

Fire officials said that two godowns, located adjacent to each other, were engulfed in flames. “We are yet to ascertain the cause of fire. While some claim it to be a short circuit, others reportedly heard a huge bang when it started around 3:30. It took us hours to douse the flames,” fire officials said.

The entire godown, which also had sawdust, caught fire trapping workers who were sleeping inside. It took the fire officials about an hour to bring it under control.

Hyderabad police commissioner CV Anand visited the spot on early Wednesday morning. “The deceased were between the age group of 23 and 30, all natives of Chapra district in Bihar. People here claim that they heard a cylinder blast. Following a dial 100, five fire-tenders were rushed to the spot by 5 am. The lower floor has scrap material, bottles, newspapers etc. It appears as if fire safety norms were violated in the place. All the men were in one room and most of them died from asphyxiation. While one person managed to jump out, we are yet to speak with him. There is a need to rethink the safety in the area as there are timber depots and other industries. The basic fire safety measures are lacking. We will be conducting a comprehensive investigation,” said the official.

Meanwhile, Chief Minister K Chandrashekar Rao has announced an ex-gratia of Rs 5 lakh to the families of the dead. Condoling the deaths of the Bihari migrant workers, the Chief Minister instructed Chief Secretary Somesh Kumar to make arrangements to have the bodies of the deceased taken to their native places.