In a drastic step, the farmers drank their own urine on Saturday, because their demands were not heeded by the government. 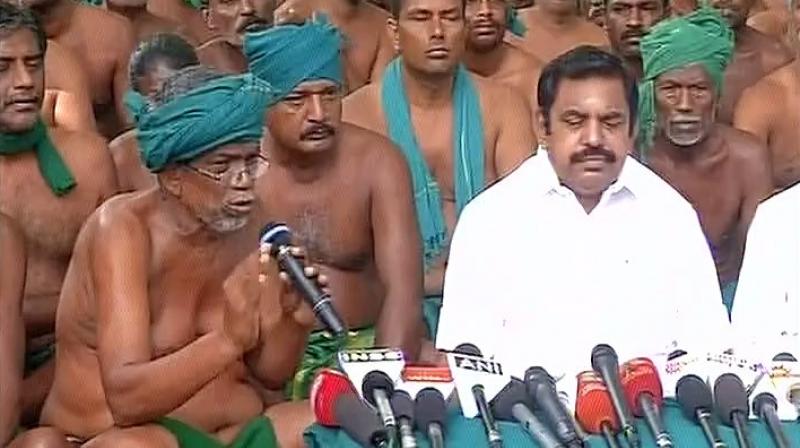 Speaking to the media, Palanisamy said, “I will take up with PM Narendra Modi the demands put forward by the farmers. I urge them to end this protest”.

However, farmer Ayyakanu, speaking for the group, said, “We want immediate loan waiver for farmers. Recently the Uttar Pradesh government waived off farmer loans. We also want it".

He asserted that the farmers would continue their month-old protest for loan waiver until Palanisamy ensured their meeting with Modi.

In a drastic step, the farmers drank their own urine on Saturday, because their demands were not heeded by the government.

According to a Hindustan Times report, the farmers said that if the Centre still ignores their demands, they will eat faeces on Sunday.

“We are not getting water to drink in Tamil Nadu, and PM Modi has been ignoring our thirst. So, we will have to quench our thirst with our own urine,” P Ayyakkannu, the state president of the National South-Indian Rivers Linking Farmers’ Association was quoted as saying.

This is not the fist time farmers are resorting to unconventional protest forms since it started over a month ago. They have protested with skulls, allegedly of farmers who committed suicide, stripped, bitten mice and snakes and even held mock funerals.

The farmers had agreed to be patient for two days, giving some time for government to get affairs in order. The move had come after they met the Minister of state for road transport and highways Pon Radhakrishnan, the only Bharatiya Janata Party MP from Tamil Nadu.

Radhakrishnan allegedly had assured the farmers that he would talk to Finance Minister Arun Jaitley and try to get a solution by May 15. He had also reportedly alleged that he would get all loan collections and payments postponed for a year. Also assuring that attempts to seize property will be suspended during this time, Radhakrishnan had promised them help for procuring new loans.

“I know it is humiliating to eat and drink our own waste. But, should the government not be ashamed of forcing us farmers to use such desperate measures? If only Modi would meet with us and hear us out,” 65-year-old Palanichamy who has been protesting at the site since day one was quoted as saying.

But Dravida Munnetra Kazhagam (DMK) working president MK Stalin on Saturday urged the farmers to defer their agitation in Delhi and take part in the April 25 bandh called by Opposition parties in the state in support of the drought-hit farmers.

"They (the farmers protesting in Delhi) should take part in the bandh and support the other steps we are to going to take on behalf of all the political parties," he said.

The farmers from the state have been demanding a drought relief package of Rs 40,000 crore, farm loan waiver and setting up of Cauvery Management Board by the Centre. The state government has already waived its loans from cooperative banks.