Dalit rights, women's safety were at centre of Gandhi's attack on Modi at Congress' ‘Save the Constitution’ event. 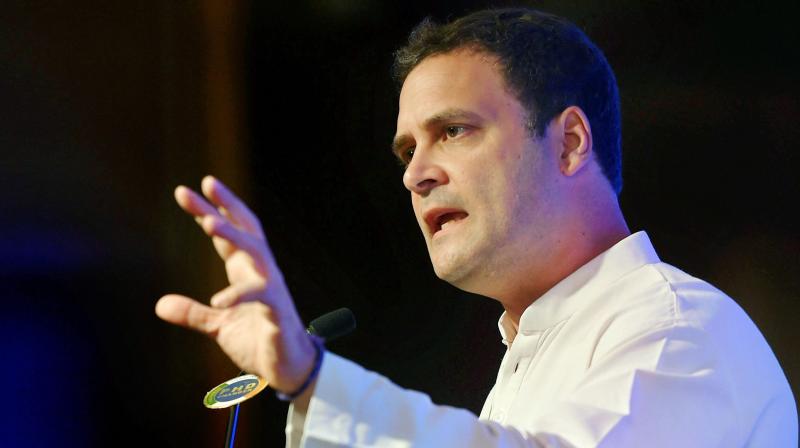 In reference to the alleged involvement of a BJP MLA in Unnao rape case, Congress chief Rahul Gandhi said, ‘Modi's earlier slogan of 'Beti Bechao, Beti Padhao' (Save daughters, educate them) had become 'Beti bachao' (Save daughters) from the BJP and its leaders.’ (Photo: PTI)

New Delhi: Congress president Rahul Gandhi on Monday launched a blistering attack on Prime Minister Narendra Modi, saying the country could burn, girls may be raped and the rights of scheduled castes and minorities be under a threat, but Modi was merely interested in becoming the Prime Minister again.

The twin burning issues of Dalit rights and women's safety were at the centre of Gandhi's all-out attack on Modi at the launch of the Congress' "Save the Constitution" programme, as he asserted that constitutional values had been endangered under the Modi government and assured the people that his party would not let it happen.

Institutions such as the Supreme Court were being trampled on and Parliament had been shut down by the government, he alleged, claiming that if he was allowed to speak for 15 minutes on a host of issues, including the Nirav Modi scam, Modi would "run away".

Going full throttle, he alleged that institutions were being packed with people who believed in the RSS's ideology.

Quoting from what he described as a statement by Modi, the Congress leader said the Prime Minister saw spirituality in sanitation work undertaken by Dalits. But people know there was no place for the community, weaker sections of society and women in his heart, Gandhi added.

Attacking Prime Minister Modi on employment and other promises made by him before the last Lok Sabha polls, Gandhi said Modi would now come up with new promises for votes.

Modi's earlier slogan of 'Beti Bechao, Beti Padhao' (Save daughters, educate them) had become 'Beti bachao' (Save daughters) from the BJP and its leaders, Gandhi said in a reference to the alleged involvement of a BJP MLA in a rape case in Unnao.

Only the Congress was capable of addressing the problems facing the country, he said.

The country will do its 'Mann ki baat' in the next elections, Gandhi said, playing on the title of the Prime Minister's monthly radio address.