The five years of hard work of party volunteers, leaders has made it possible for the BJP to notch up this success. 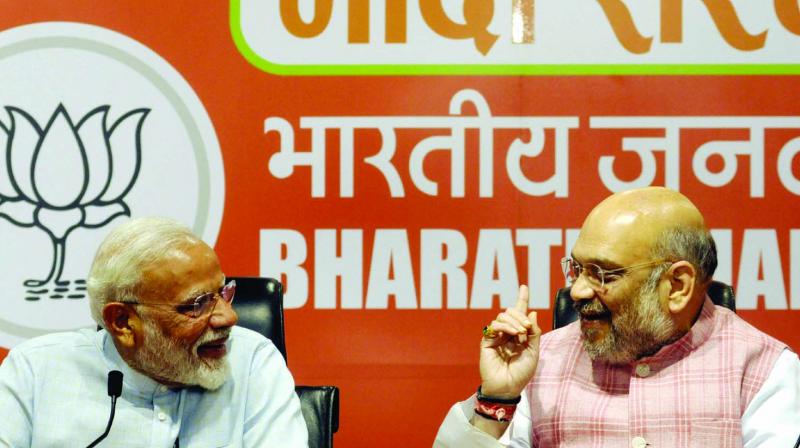 The saffron party did not give up their existing allies which helped BJP to retain its pan-India image. (Photo: File)

Mumbai: The trends clearly show that Narendra Modi would be returning to power. The five years of hard work of party volunteers, leaders has made it possible for the BJP to notch up this success.

The BJP continued projecting Narendra Modi as a decisive and strong leader in whose hands the country was safe. During campaigning, the party kept national security (Pulwama and Balakot) as a key electoral issue.

The party leadership identified around 120 seats as new areas and worked relentlessly. It focused on winning the ground in eastern states of West Bengal and Odisha as well as the northeastern state which have brought it impressive gains.

The BJP, however, did not take off its eyes from its strong seats like Gujarat, Rajasthan and Madhya Pradesh, where they faced setbacks in the Assembly elections.

In Uttar Pradesh, the game changer state, where the SP and the BSP formed an alliance, analysts predicted the fall of the BJP. However, those analyses did not make the BJP lose their focus there.

The saffron party did not give up their existing allies which helped BJP to retain its pan-India image.

The BJP leadership never compromised with its focus on the BJP as an organisation. The party has always been at the centre of the activities and even its ministers were always in the spotlight. BJP chief Amit Shah kept assigning tasks to the leaders and they were engaged to reach out the welfare schemes and programmes of the government.