India   All India  23 May 2019  How votes are counted by Election Commission
India, All India

How votes are counted by Election Commission

If there is a discrepancy between VVPAT count and EVM results, the printed paper slips count is taken as final. 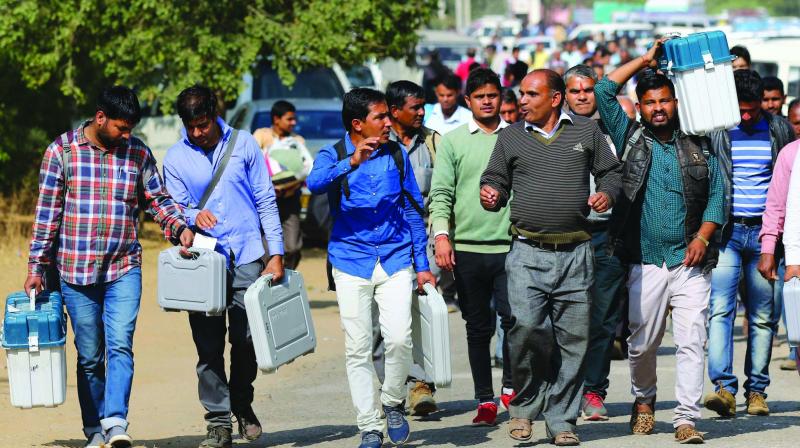 The EC has not clarified whether there would be any further action (such as counting of all VVPATs in a constituency or Assembly segment) if there is adiscrepancy in the counts of one of the five VVPATs.

The counting of votes for general election 2019, which concluded on Sunday, will begin on Thursday at 8 am. The election was conducted in seven phases for 543 constituencies of Lok Sabha. The Election Commission of India (ECI) uses electronic voting machines (EVM) to conduct elections. Since 2000, ECI has conducted 113 Assembly and three general elections using EVMs. Voter verifiable paper audit trail (VVPAT) system was added to EVMs in 2013 to increase transparency and improve voter confidence in the system. The VVPAT system generates a printed paper slip bearing the name and election symbol of the candidate. On April 8, 2019, the Supreme Court instructed the ECI that printed VVPAT slips from randomly selected five polling stations in each Assembly segment of a parliamentary constituency should be matched with EVMs. In this article, we explain the election counting process in India.

What is the counting process?
Counting is performed by counting supervisors appointed by the RO. Counting staff is appointed through a three-stage randomisation process to ensure impartiality. Candidates along with their counting agents and election agents are also present in the counting hall. Counting of votes begins with electronically transmitted postal ballots (ETPB) and postal ballots (PB). These votes are counted under the direct supervision of the RO. Counting of EVMs can start 30 minutes after the commencement of PB counting, even if all PBs have not been counted. At the end of each round of counting, the results from 14 EVMs are declared.

What is the process for counting VVPAT slips?
The ECI prescribes the process for randomly selecting one EVM for each Assembly segment of a parliamentary constituency for VVPAT matching. The verification of VVPAT paper slips are conducted inside a secured VVPAT counting booth in the counting hall with access to authorised personnel only. Any counting table in the hall can be converted into VVPAT counting booth after completing EVM vote counting. Parliamentary constituencies generally have between five and 10 Assembly segments. The Supreme Court has decided that VVPAT slips of five randomly selected polling stations for each Assembly segment shall be matched with the result shown in the respective EVMs. This implies that VVPAT paper slips need to be matched for about 25-50 machines for each parliamentary constituency. This process requires personal supervision of RO/ARO. The ECI has decided that the counting of five VVPATs will be done sequentially. The RO can declare the final result for the constituency after the VVPAT matching process has been completed.

What happens if there is a discrepancy between the VVPAT count and the EVM results?
In such a case, the printed paper slips count is taken as final. The ECI has notclarified whether there would be any further action (such as counting of all VVPATs in a constituency or assembly segment) if there is adiscrepancy in the counts of one of the five VVPATs.
— PRS Legislative Research