Is there a weak link in the strongroom?

NDTV has ceased conducting exit polls since they are an extremely expensive proposition. 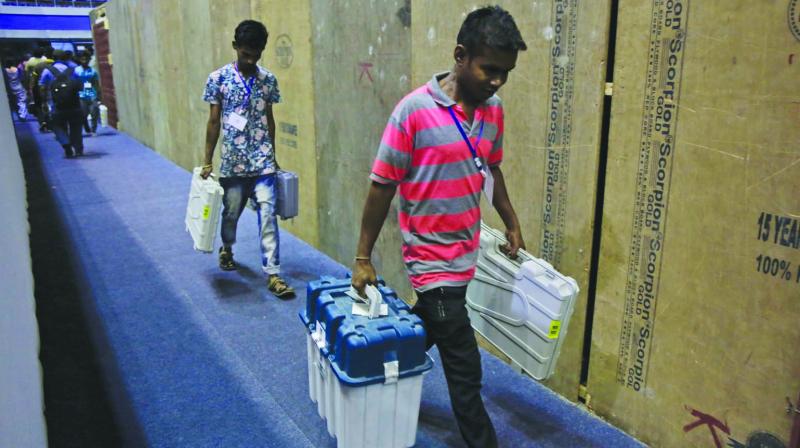 Why does BJP win all exit polls but lose several elections? In the spate of elections contested after the BJP’s win in 2014,  there have been many losses that the BJP has suffered. Yet, they have won virtually all exit polls preceding the results. The trend of fashioning poll surveys to egg undecided voters to vote for the obvious winner began in 2014.  A sting conducted by a major Hindi channel in 2014 showed virtually every pollster in the country willing to bend the survey by the weight of the money being offered- Cfore being perhaps the only exception to it.

If a pre-poll survey persuades undecided voters to vote for the leading Political Party, how does an exit poll lead help to any political party? Just examine the following facts- Jagan Mohan Reddy’s YSRCP announced support for the Modi led NDA on May 19 (the day of exit polls) 2019: Mayawati, Jagan Mohan Reddy and K Chandrashekara Rao have already consented to have dinner with Modi on May 21; the NIA has begun investigations against the DMK which is part of UPA; both Akhilesh and Mulayam Singh Yadav have been given clean chits by the Supreme Court of India  on May 21  - after the CBI stated in an affidavit that no actionable wrong was committed by the duo.

Does it not appear to the reader that on the strength of the results of an exit poll, one Political Party has monopolized the entire advantage of being the first mover to pre-empt any other party striking a deal with potential allies?

Hectic political activity is taking place in both Madhya Pradesh and in Karnataka where the BJP is hoping to regain power - an exit poll result like the one displayed on 19th, strengthens the BJP’s hands to destabilize Constitutionally formed governments.

Does the fact that stocks added a whopping Rs 318000 Crore to the investor kitty within 60 seconds of trading on May 20, 2019  provide the answers? It is rumoured that some key stockbrokers have funded the cost of the exit polls. Modi Ji’s key business confidante Gautam Adani has witnessed his stock value rise by around 20% cumulatively.

Consider how exit polls have performed over the years- in 2004, while exit polls suggested 232-275 for NDA, they only got 187. In 2009, polls suggested that UPA would get 199 seats, it got 262. In 2014 the BJP was not projected as being able to get a majority on its own. From 2014 onwards every single exit poll has favoured the BJP in every ensuing election, although they have lost elections in a number of states.

Look at former CEC S Y Quraishi's tweet yesterday: “Why is EC not clarifying what the facts are? Speed is extremely important” while referring to the unusual movement of EVM’s across the nation. While such movement has been recorded at several parts of UP including Amethi, Chandauli, Jhansi, Ghazipur and Noida, the Election Commission has issued no statement to assuage doubts. Mr. Quraishi himself tweeted a copy of the EC guidelines which reads as “All polled and reserve EVM’s after the voting shall be under the cover of armed police at all times. Reserve EVM’s should also be returned at the same time when the polled EVM’s are returned at the receipt centre.” The guidelines apparently also mention that “It must be ensured that all reserve EVMs are also deposited in the strong room meant for reserve EVMs at the same time when the polled EVMs are deposited in the strong room meant for polled EVM’s."

It is widely speculated that the BJP benefits from the unusual movement of reserve EVM’s at unearthly hours without due information to all political parties uniformly. A bare reading of the above guidelines clearly indicates that serious mis-application of the guidelines are rife in the current electoral process. News anchor Rahul Kanwal has written an FB Post regarding the “sensational revelation" about BJP’s conspiracy through EVMs.

While it is conceded that EVMs are not foolproof and can malfunction owing to technical glitches, the real question is why does every malfunctioning EVM since 2014  only vote the BJP?!!
(Brijesh Kalappa is a Congress party spokesperson)