India   All India  23 May 2019  Newly-elected MPs not to be lodged in Delhi hotels
India, All India

Newly-elected MPs not to be lodged in Delhi hotels

Following this, the Lok Sabha’s housing committee had proposed to build 88 new blocks in the Western Court. It also has two levels of parking. 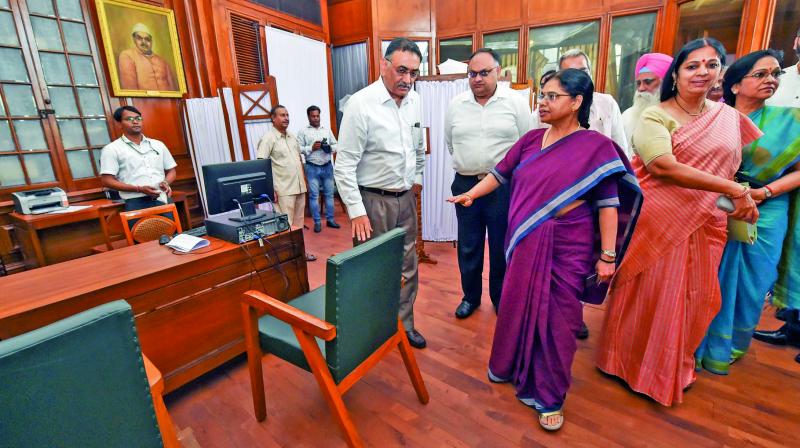 Secretary-general of Lok Sabha Snehlata Shrivastava reviews the preparations for the 17th Lok Sabha at Parliament in New Delhi on Wednesday. (Photo: PTI)

New Delhi: Lok Sabha secretary general Snehlata Shrivastava on Wednesday said the newly-elected members of the Lower House of Parliament will no longer be lodged in hotels, but in state bhavans, Western Court, a transit hostel for parliamentarians, and its annexe building.

With the counting of votes for the Lok Sabha polls scheduled for Thursday, the newly-elected members are expected to start arriving in the national capital from Friday, and for that, the secretariat has already started making arrangements.

At a press conference here, Ms Shrivastava said the Lok Sabha secretariat has done away with the system of transit accommodation in hotels. This system, at times, invited criticism for the money it cost the exchequer.

“The newly-elected members will be accommodated in Western Court, its newly-built annexe and various state bhavans. Thus, the LS secretariat has done away with the system of transit accommodation in hotels,” Ms Shrivastava said.

Sources said that in the 2014 general elections more than 300 new MPs were elected, causing an accommodation crisis as some former members had not vacated their official residences.

The Lok Sabha secretariat was therefore forced to make accommodation arrangements for the newly elected MPs in hotels which had cost the exchequer Rs 30 crore in 2014.

Following this, the Lok Sabha’s housing committee had proposed to build 88 new blocks in the Western Court. It also has two levels of parking.

According to an official, arrangements for 100 new MPs have been made in the Western Court and its annexe building, while 265 new parliamentarians would be lodged in state bhavans.

Ms Shrivastava informed reporters that a series of initiatives have been taken by the Lok Sabha secretariat to make registration formalities seamless and technology-oriented and all paperwork related to salaries, allowances and a host of other matters would be completed at a single desk.

The secretariat has also set up help desks at all three terminals of the Indira Gandhi International Airport and railway stations in the national capital, she said, adding that 56 nodal officers have been assigned around eight to 10 constituencies each to get in touch with the newly-elected parliamentarians.