India   All India  23 May 2019  Sushma Swaraj brings up Pulwama at SCO meeting
India, All India

Swaraj said the wounds of Pulwama were still raw as the sad news came in of the Sri Lanka terror attacks. 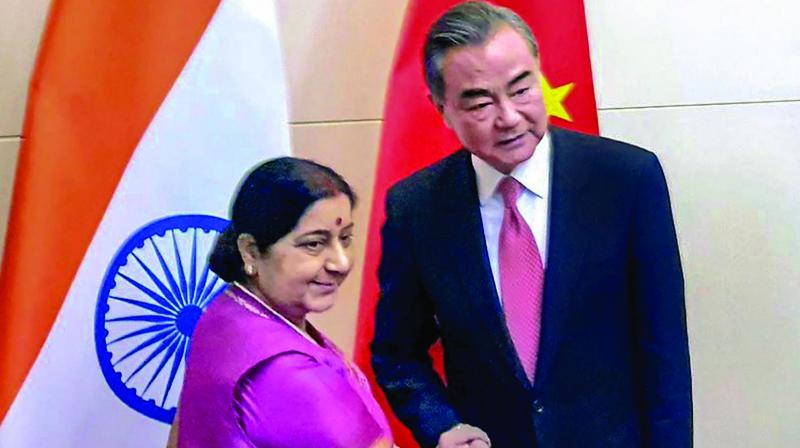 New Delhi/Bishkek (Kyrgyzstan): Speaking in the presence of Pakistan foreign minister Shah Mahmood Qureshi, next to whom she was seated, external affairs minister Sushma Swaraj on Wednesday referred to the Pulwama terror attack on February 14 this year by Pakistan-based terror group Jaish-e-Mohammed as a “raw wound” in her speech at the meeting of foreign ministers of the Shanghai Cooperation Organisation at Bishkek in Kyrgyzstan. Saying India was “determined to fight firmly and resolutely” against the menace of terror, Ms Swaraj said the wounds of Pulwama were still raw as the sad news came in of the Sri Lanka terror attacks.

In what is seen as a veiled message to both Pakistan and China on connectivity, Ms Swaraj said India “welcomes reg-ional connectivity initiatives, that are inclusive, sustainable, transparent and respect the principles of sovereignty and territorial integrity”.

Ms Swaraj, incidentally, had a separate bilateral meet on the sidelines with Chinese foreign minister Wang Yi, when issues of “bilateral interest, including on the understanding reached at the Wuhan summit”, were discussed. This was the first top-level Sino-Indian meeting after China earlier this month lifted its objections to the listing by the UN of JeM chief Masood Azhar as a global terrorist, much to India’s relief.

Media reports from Bishkek said there was no separate bilateral meeting between Ms Swaraj and Mr Qureshi. Photographs appeared in the Pakistani media showing the two leaders seated next to each other at the SCO meet. There were also reports that the two leaders had exchanged pleasantries.

Indian government sources late on Wednesday night said Ms Swaraj and Mr Qureshi were not seated next to each other at the SCO meeting and that there was only exchange of pleasantries between the two leaders and no separate bilateral meeting. Sources also said that photos being circulated in the media showing Ms Swaraj and Mr Qureshi seated next to each other were of the group of SCO foreign ministers who were to call on the Kyrgyz President and not a photo of the actual CFM conference.

Sources also said a picture of Ms. Swaraj and her Pakistani counterpart sitting on a sofa next to each other and conversing was of the leaders waiting in the “holding room” before the start of the conference.

Government sources reiterated that only pleasantries were exchanged.

India and Pakistan had come to the brink of war in late February this year after the Pulwama attack, when India launched airstrikes against a JeM camp, following which Pakistan retaliated resulting in a dogfight between the two Air Forces.

In her address at the SCO session, Ms Swaraj, speaking on connectivity, highlighted the projects supported by India, including the Chabahar port project in Iran, which has led to a sea-land link from India to Afghanistan and Central Asia, bypassing Pakistan. It may be recalled that India had earlier refused to join the Chinese Belt and Road Initiative (BRI) due to concerns over the China-Pakistan Economic Corridor (CPEC) that passes through Pakistan-occupied Kashmir, which India regards as Indian territory illegally occupied by Pakistan.

Wednesday’s SCO conference was the last major foreign policy engagement of the Narendra Modi government in its current tenure ahead of India’s election results that will be announced on Thursday.

On terrorism, Ms Swaraj said: “Our heart goes out to our brothers and sisters of Sri Lanka, who have recently witnessed the ghastly act of terrorism. Our wounds of Pulwama attack were still raw and the news from the neighbourhood made us more determined to fight firmly, resolutely against this menace.”

On efforts to ensure peace in war-torn Afghanistan, Ms Swaraj said: “India stands committed to any process that can help Afghanistan emerge as a united, peaceful, secure, stable, inclusive and economically vibrant nation, with guaranteed gender and human rights. I wish to once again underscore the importance India attaches to the SCO Afghanistan Contact Group and welcome an early conclusion of the draft roadmap of further actions of the Contact Group.”