India   All India  23 May 2020  5 lakh guest workers brought back to Madhya Pradesh
India, All India

At least 3.52 lakh migrants have returned to MP by buses while 1.46 lakh others returned on 119 special trains 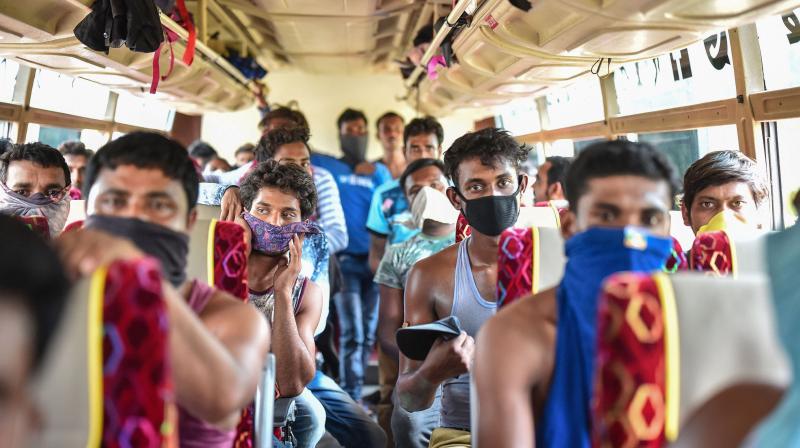 Government had brought back over five lakh migrants, mostly by buses, (PTI Photo)

Bhopal: Over five lakh guest workers from Madhya Pradesh, who were stranded in different parts of the country due to the coronavirus-induced lockdown, have been brought back to their home state, a government official said on Saturday.

As of Friday, the state government had brought back over five lakh migrants, mostly by buses, additional chief secretary ICP Keshari said.

At least 3.52 lakh migrants have returned to MP by buses while 1.46 lakh others returned on 119 special trains, said the senior bureaucrat, who is in-charge of state control room.

Keshari said 2.02 lakh migrants were brought back from Gujarat, 1.12 lakh from Maharashtra and 1.10 lakh from Rajasthan.

Apart from these, stranded migrants were also brought back from Goa, Delhi, Punjab, Haryana, Kerala, Andhra Pradesh, Tamil Nadu and Telangana, he said.

The state government has also been transporting migrant workers coming from other states to the Madhya Pradesh-Uttar Pradesh border.

In view of the plight of guest workers stuck in different parts of the country amidst the lockdown, the Railways started operating 'Shramik Specil' trains on May 1.

The Centre had announced considerable relaxations during the third phase of the lockdown, which had kicked in on May 4, regarding the inter-state movement of migrant labourers, students, tourists and other people with priority accorded to those stranded in green and orange zones.

The lockdown was subsequently extended till May 31.