A misleading campaign alleged that Shujaat was working for govt agencies. 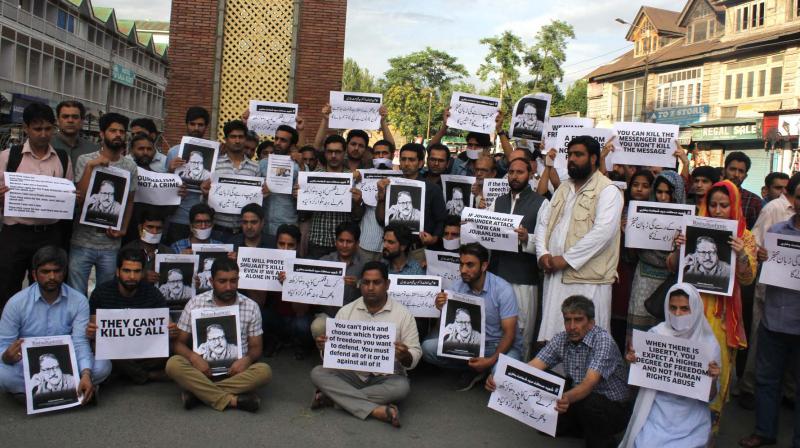 Srinagar: Mummy, as we all call Mushtaq Ali’s mother broke down and cried as I sat opposite her at her residence in Srinagar’s Peer Bagh area. It was the day of Id and I had gone to offer greetings but was astounded to hear her saying, “I couldn’t sleep in past two nights. I kept crying. There is no Id.”

Two days before Id, Rising Kashmir editor-in-chief Syed Shujaat Bukhari, along with his two security guards, was gunned down by three motorcycle-borne assailants in Srinagar’s media hub Mushtaq Press Enclave on June 14. The place is named after Mushtaq Ali, the ace photographer who fell to a parcel bomb explosion in this correspondent’s office in 1995.

Incidentally, the spot where Bukhari was shot dead is just outside quarter number 8 where Mushtaq had opened the package and took the brunt when a sophisticated concealed in it exploded. It was on September 7, 1995 when a  woman clad in an burkha delivered the package to my office in my absence.

When I returned from a wedding reception and began making phone calls for a story, my colleague Mushtaq Ali, an Agence France-Presse photographer, opened the package for me. The helpful gesture proved deadly. The parcel exploded, severing his left hand, disfiguring his face and severely injuring his right hand and abdomen. He died of his wounds three days later. Our photographer Habibullah Naqash was injured. I too suffered multiple injuries, including perforation on my right eardrum in the impact of the blast.

Bukhari’s murder had opened old wounds for Mushtaq’s mother and everyone of us who  knew him. It also served a grim reminder about the vulnerability of Kashmir-based media persons.

Mushtaq was the fifth Kashmiri journalist to be murdered in the line of duty. Nine more fell prey in later years. Each of the murders has had a profound impact on the local press community.

The 1990 murder of Lassa Kaul, director of the government-owned Doordarshan television station in Srinagar, prompted the station’s closure for a three-year period. The 1993 slaying of All Indian Radio’s local news reader Muhammad Shafi Butt sparked a wave of resignations by his colleagues. The April 1991 murder of Al-Safa editor-in-chief Muhammad Shaban Vakil was aimed at serving to mute local journalists’ criticism of militants. The August 1994 murder of stringer Ghulam Mohammed Lone and his minor son in the town of Kangan allegedly involving the Army has had a chilling effect on stringers working in Kashmir.

Bukhari, 50, apart from being the group editor-in-chief of daily newspapers Rising Kashmir (English), Buland Kashmir (Urdu) and Sangarmal (Kashmiri) and weekly Parcham (Urdu) was a social and cultural activist. Before taking over as editor-in-chief of Rising Kashmir in 2009, he had worked as J&K correspondent of The Hindu for 15 years. He was provided police protection in 2010 after he survived a couple of reported attacks and kidnapping bids. In Bukhari’s case, it is believed that his involvement in Track II diplomacy on Kashmir won him many enemies. He had, a few days before the attack, met chief minister Mehbooba Mufti, and reportedly sought enhanced security.

Few days before his killing, Bukhari had announced on his Facebook timeline that he was taking leave from this online social networking site and those who wished to stay in touch with him could follow him on Twitter. A staff member at Rising Kashmir said that it was because of “dirty and outrageous trolling” that Bukhari quit Facebook. If Kashmiri-origin Pakistani journalist, Ershad Mahmud, is to be believed, Bukhari had apprehensions of being attacked after he attended a Track II conference on Kashmir in Dubai in 2017. The meet and its participants came under severe criticism by Hizbul Mujahideen and Lashkar-e-Tayyaba.

Mr Mahmud, a co-participant at the Dubai conference, said that before the Dubai meet, Bukhari told him that sources in Srinagar had cautioned him that an order to kill him had been issued.

“Bukhari asked me to talk to Peer Sahib (Syed Salahuddin). When I contacted the Hizb chief, he  asked me to tell Bukhari that he should be rest assured that this is all propaganda,” said Mr Mahmud.

After Bukhari’s brutal killing, widely mourned across the world  as an attempt to “muzzle press freedom”, there have been calls to the authorities to arrest and punish his killers and to introduce steps to ensure security for media persons.