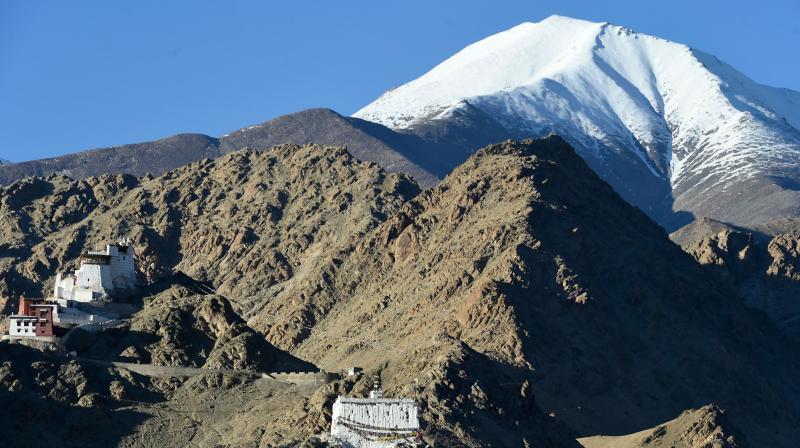 Houses are seen on the mountain in Leh, the joint capital of the union territory of Ladakh. PTI photo

New Delhi: Top Chinese and Indian military commanders have arrived at a consensus on the "outstanding issues" and agreed to take necessary measures to "cool down" the situation at their borders, the Chinese Foreign Ministry announced on Tuesday.

On Monday, Lt Gen Harinder Singh, the commander of the 14 Corps, held a nearly 11-hour meeting with Commander of the Tibet Military District Maj Gen Liu Lin in an attempt to lower the temperature between the two sides.

The talks were held in the midst of escalating tension between the two countries following the violent clashes in Galwan Valley last week that left 20 Indian Army personnel dead, significantly escalating the already volatile situation in the region.

Asked for the details at what transpired at the meeting of the top commanders held at the Chinese side of the Line of Actual Control, Chinese Foreign Ministry spokesman Zhao Lijian said the two sides expressed the wish to control the situation through dialogue and consultation.

"On June 22, the Chinese and Indian border troops held the 2nd commander-level meeting at the border areas This is also the first commander level meeting since the Galwan Valley clash happened on June 15," he said.

"This meeting showed that the two sides wish to control and alleviate the situation through dialogue and consultation.

"During the meeting and based on the consensus reached at the first commanders level meeting (on June 6), the two sides had a candid and in-depth exchange of views on the outstanding issues and agreed to take necessary measures to cool down the situation, Zhao said.

The two sides agreed to continue with the dialogue and jointly work for the peace and tranquillity of the border areas, he said.

To a question that Indian Army has stated that two sides have agreed to disengage the troops and whether he can confirm it, Zhao said the specific measures are under discussion by the border troops of the two sides on the ground, I have no further information to release on this.

When asked about the Chinese casualties, he said China and India are in dialogue and talks with each other to resolve this issue through diplomatic and military channels.

"As for what you saw in the media, for example some people alleged that casualties on the Chinese amounted to 40. I can tell you for sure this is fake news, he said.

This is the first time China has commented on the casualties. The spokesman, however did not elaborate.

Ever since the clash on June 15 at the Galwan Valley between the Indian and Chinese troops, Beijing has consistently declined to reveal the details of the casualties on its side, while the official media editorials have said that China too suffered casualties.

The Indian and Chinese armies are engaged in the standoff in Pangong Tso, Galwan Valley, Demchok and Daulat Beg Oldie in eastern Ladakh. A sizeable number of Chinese Army personnel even transgressed into the Indian side of the de-facto border in several areas including Pangong Tso.

The Indian Army has been fiercely objecting to the transgressions, and demanded their immediate withdrawal for restoration of peace and tranquillity in the area. Both sides held a series of talks in the last few days to resolve the border row.