India   All India  23 Jul 2018  Gujarat man gets saved by his heroic dog after being attacked by 3 lions
India, All India

Dog was unharmed but Bhavesh suffered minor injuries on his back, arm when one of the lions hit him with its paw during whole episode. 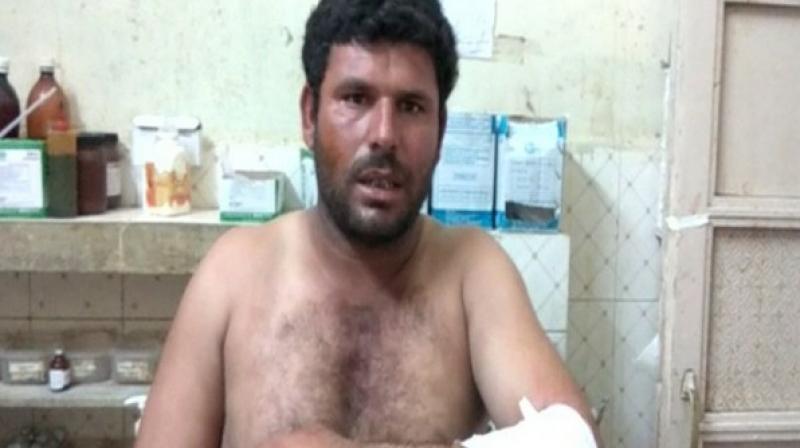 Bhavesh was treated for the injuries at a government hospital in the nearby area. (Photo: ANI)

Amreli (Gujarat): Dogs prove time and time again that they are man's best friend.
When a man was attacked by three lions in Amreli's Ambardi village in Gujarat, his dog knew exactly what to do.

A shepherd from Ambardi village was saved by his dog after he was attacked by three lions on July 21, while he was grazing his sheep.

The shepherd, Bhavesh Hamir Bharwad (25) was trying to save his sheep from the lions when they attacked. Unfortunately, he couldn't do much and three of his sheep were killed.

On seeing the man under attack from the wild animal, the dog immediately began to bark with an intention to attract the attention of people nearby. Luckily, people were quick to gather at the spot and the lions fled after seeing the crowd.

Interestingly, the dog remained unhurt. But Bhavesh suffered minor injuries on his back and arm when one of the lions hit him with its paw during the whole episode.

Bhavesh was treated for the injuries at a government hospital in the nearby area.

Meanwhile, the villagers have informed the forest department to keep a watch as the lions could come back again.