Karnataka CM Kumaraswamy also said that a fake letter with his forged signature that he had resigned was being circulated. 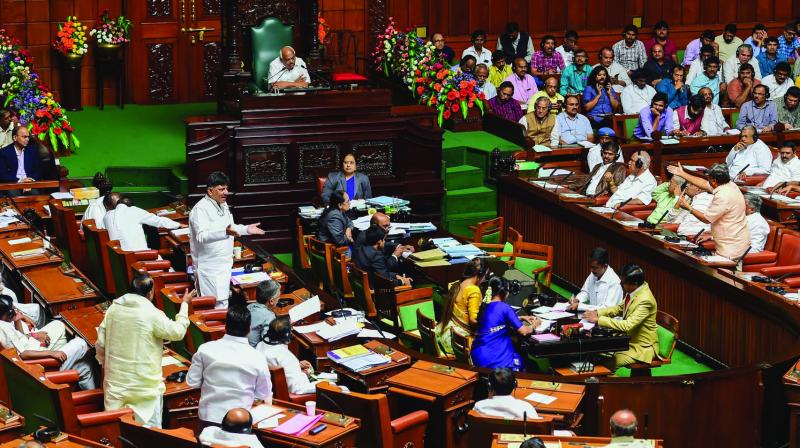 Bengaluru: The impasse in the Karnataka Assembly over voting on the confidence motion moved by chief minister H.D. Kumaraswamy on Thursday, continued on Monday with Speaker K.R. Ramesh Kumar insisting that he would not adjourn the House till the voting happens. The ruling Congress and JD(S), amid complete pandemonium in the House, demanded that the voting be put off till they had all spoken and the Speaker decides on the resignations of the 15 rebel  MLAs, most of whom are now camping in Mumbai.

However, BJP leader B.S. Yeddyurappa demanded a trust vote even by midnight, as the two Independent MLAs approached the Supreme Court with a fresh plea, seeking holding of the floor test “forthwith” in the state Assembly on the trust motion moved by chief minister H.D. Kumaraswamy. A bench headed by Chief Justice Ranjan Gogoi on Monday declined to hear during the day the plea by R. Shankar and H. Nagesh and posted it for Tuesday.

The Assembly was further disrupted when copies of a letter claiming that H.D. Kumaraswamy had resigned as chief minister were circulated in the House by Mr Kumaraswamy. Mr Kumaraswamy decried the use of the “fake” letter addressed to the governor, which had the chief minister’s signature, stating he wishes to resign for personal reasons.

Members of the JD(S)-Congress kept the discussion going with no sign that the House would be able to hold a trust vote by Monday night. The coalition has already defied the two deadlines set by governor Vajubhai Vala, who had said in his two missives to the CM that he was “prima facie satisfied” that the CM had lost the confidence of the House. On Friday, the Speaker had indicated that voting on the confidence motion would conclude on Monday, but with the coalition MLAs in no mood to allow voting, all eyes are on the Speaker and the decision he takes. The Opposition BJP, led by its state president B.S. Yeddyurappa, suspects that the voting is being delayed by the Congress-JD(S) government only to buy time to make a last-ditch effort to win back the rebel legislators, who are being threatened with disqualification if they do not return to the House by Tuesday. The rebels have announced repeatedly that t they have no intention of coming back to Bengaluru and supporting the coalition government during the trust vote. The coalition is no doubt on shaky ground after the resignations of the 15 and the withdrawal of support by the two Independents, and can now boast of only 101 MLAs in the Assembly (excluding the Speaker and the nominated member), while the BJP has the support of 107 MLAs, including the Independents. Kagawad Congress MLA Shrimant Patil is unlikely to participate in the trust vote proceedings as he has been admitted to a hospital in Mumbai after suffering from chest pain.

Realising that he does not have the numbers on his side, Mr Kumaraswmay met the Speaker and asked him to postpone voting on the confidence motion by two or three days, but Mr Ramesh Kumar has not acceded to his request.

After the Assembly reconvened on Monday, rural development and panchayati raj (RDPR) minister Krishna Byregowda, who also holds the law and parliamentary affairs portfolio, argued that the trust vote proceedings will not be valid unless the Speaker decides on the resignations of the 15 rebel Congress and JD(S) MLAs.

Participating in the debate on the trust vote, Mr Byregowda said: “The Supreme Court has not spoken on the issuance of a whip by a legislature party. At the same time the court has given the liberty to rebel MLAs to participate in the ongoing trust vote proceedings, saying there can be no compulsion in this regard. The court has not interfered with the constitutional right of the Speaker to accept or reject the resignations of the rebels. There is another dimension to the resignations too — are the rebel MLAs members of this House? These MLAs are liable to disqualification under the Tenth Schedule of the Constitution if their resignations are rejected by the Speaker”, Mr Byregowda explained.

“We are in an extraordinary situation... I request the Chair to decide on the resignation first. Or else, it will (confidence vote) will have no standing,” he said as the trust vote debate dragged on for the third day.

Meanwhile, the Speaker has issued notices to all the rebel MLAs asking them to appear before him on Tuesday.  In a related development, he also allowed the notice on the point of order raised by Congress Legislature Party (CLP) leader Siddaramaiah on the issuance of a whip to rebel Congress MLAs and said the CLP leader has the right to issue the whip to his party legislators under the Tenth Schedule of the Constitution.