The central government is already in control of seaways, airways and trains, and is now trying to control roadways as well, Kanimozhi said. 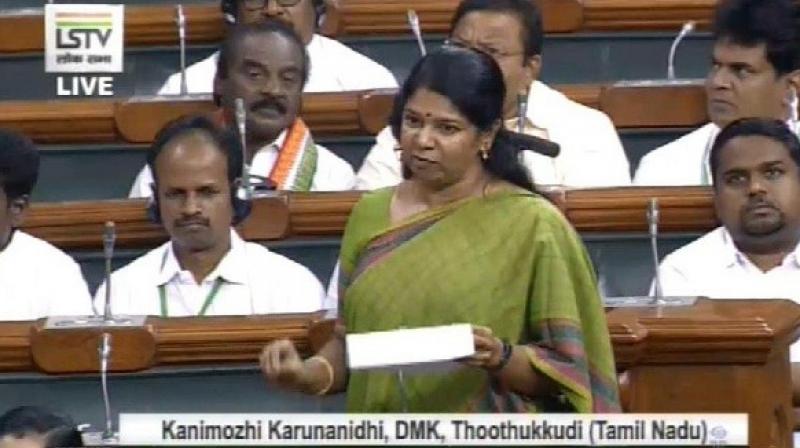 In a veiled dig at Gadkari, she said he is a very effective minister but has made some 'very tall and big' promises like many claims of the Narendra Modi government. (Photo: File)

New Delhi: Some opposition members on Tuesday supported safety and traffic violation aspects of the Motor Vehicles (Amendment) Bill, 2019, but at the same time accused the Centre of trying to take away state's powers with certain provisions of the draft law.

In Lok Sabha, DMK's Kanimozhi and Trinamool Congress' Saugata Roy asked Transport and Highways Minister Nitin Gadkari, who was present in the House, to incorporate suggestions offered by their parties in the bill.

Kanimozhi said Gadkari may have assured the opposition that it is up to states to follow many provisions of the bill but said it was not enough as government and minister are liable to change with time.

The central government is already in control of seaways, airways and trains, and is now trying to control roadways as well, she said.

She also objected to the bill's provision that does away with the need for any education for a driver.

In a veiled dig at Gadkari, she said he is a very effective minister but has made some "very tall and big" promises like many claims of the Narendra Modi government.

She also added that he is one of the most humble ministers who speak convincingly and the way he listened to opposition members over their concerns was admirable.

Roy spoke in support of the bill's safety and road violation features but added that it has gone into the realm of the state government's powers.

The TMC leader also called for taking measures to reduce the number of cars on roads in big cities and encouraging people to shift to mass transport.

Enforcement is key and strict laws alone will not do, he said, asking the minister to do "hand-holding" of states and not usurp their powers.

He called Gadkari a "dream merchant" but added that India needs "dreamers" like him who can think big.

Corporates should not be allowed to enter the transport sector, he added.

Lok Sabha had begun discussion on the bill on Monday, with Gadkari asserting that it will weed out corruption, improve road safety and usher in use of technology to regulate traffic.