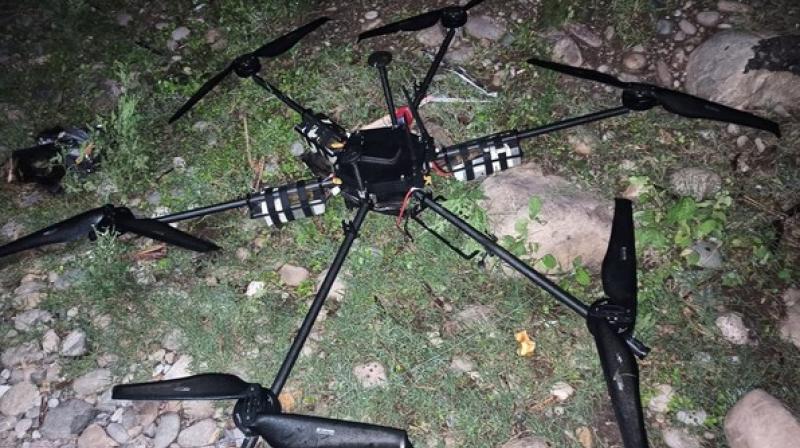 The IED material was attached with the flying object and was meant to be assembled into an IED before use. (ANI)

Srinagar: The Jammu and Kashmir police on Friday said that its men shot down a Hexacopter Drone carrying an Improvised Explosive Device (IED) weighing five kilograms in Kanachak area close to the International Border (IB) with Pakistan in the Union Territory’s Kathua district.

It claimed that after receiving input about the militants’ plan to drop the consignment in the strategically vital area, a Quick Reaction Team (QRT) quickly swung into action and shot the drone down on seeing it flying up in the Kanachak area.

“The Hexacopter, having six wings, was spotted in the area early Friday. After being brought down at about eight kilometres inside the IB we found that it had five kilograms of IED attached to it. It is an assembled drone with parts from China, Taiwan, and Hong Kong. The string used for dropping of payload is similar to the one used in the June 27 drone attack at the Indian Air Force Station, Jammu,” said Additional Director General of Police, Mukesh Singh.

He said that the police had earlier received “specific input” about Jaish-e-Muhammad (JeM)’s plan to drop a payload through a drone near Akhnoor area of Jammu and the readymade IED was supposed to be picked up by someone.

While addressing a hurriedly called press conference in Jammu, Singh said that the serial number of the flight controller used in the drone is just one digit different from the drone that was earlier shot down at Akhnoor some time ago. “The IED material was packed, and it was almost a ready-made IED just to be triggered by connecting a few wires. Preliminary analysis suggested that it was a Hexacopter with six wings fitted with a flight controller and a GPS,” the officer said.

He said, “It was to be picked up by someone. We waited for the suspect, but none turned up. It seems the JeM has assembled many drones with the same series and there is just a difference of one digit in the serial number of the one drone recovered earlier at Akhnoor and today’s one.”

He further said that the drones recovered in the recent past were used to drop payloads including AK-47 rifles and IED material. “Such drones can travel up to 20 km distance depending on the payload,” Singh said. He added that, so far, as many as 16 AK-47 rifles dropped by the drones in Jammu region have been seized by the J&K police.

The Indian Army, the BSF and other Central security forces and the J&K police have been on high alert across the strategically vulnerable Jammu region since the overly sensitive IAF Station in Jammu came under a terror attack on June 27 when two low-intensity bombs believed to have been dropped by drones hit a barracks and an open space in quick succession injuring two IAF personnel.

Meanwhile, two militants including a senior commander of Lashkar-e-Tayyaba (LeT) were killed in a gunfight outside Kashmir Valley’s north-western town of Sopore overnight, the police said.

A police spokesman said here that the encounter in Sopore’s Warpora began after the security forces laid siege to the area on learning about the presence of militants.

He identified the LeT commander as Fayaz War who, he alleged, was involved in several attacks on security forces and civilians.