The high court will hear the matter next on August 4 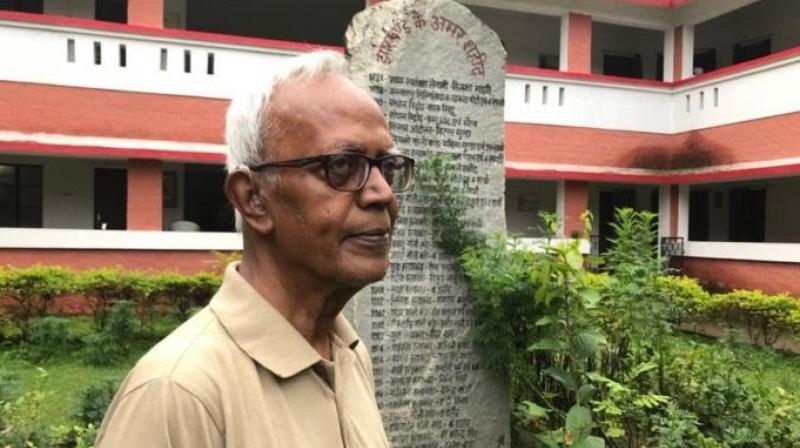 Swamy died at the private Holy Family Hospital in the city on July 5. (Photo: Twitter/@WilfredQuadros)

Mumbai: The counsel of late jesuit priest Stan Swamy, an accused in the Elgar Parishad-Maoist links case who died earlier this month, urged the Bombay High Court on Friday to monitor the magisterial inquiry into his death by invoking its "parens-patriae" jurisdiction.

Senior counsel Mihir Desai, who represented Swamy in the high court, said that although the activist was dead and there existed no question of him being granted bail any more, the high court need not consider the late priest's appeals seeking bail abated.

He said that there existed previous Supreme Court judgements ruling that high courts could exercise "parens-patriae jurisdiction" or act as the parent of such appellants, who were not in a position to take decisions for themselves.

Advocate Desai urged the high court to permit Swamy's aide, father Frazer Mascarenhas, be permitted to participate in the inquiry supposed to be conducted into Swamy's death as per section 176 of the CrPC.

He urged the court to direct that the inquiry be conducted as per the National Human Rights Commission (NHRC) guidelines, and also to direct the magistrate to submit a copy of the inquiry report before the high court so that the same can be monitored.

"We are looking at a peculiar situation here since the appellant died while the appeals were pending. But, the HC has wide powers," Desai said.

He cited the Bhopal gas tragedy case, and the case of comatose nurse Aruna Shanbaug, where courts had exercised their parens-patriae jurisdiction.

Appearing for the National Investigating Agency (NIA), Additional Solicitor General Anil Singh said that while the agency had no objection to father Mascarenhas participating in the inquiry, the court need not pass any directions on the magistrate following the NHRC guidelines since that was part of procedure and would be followed.

Singh said that the NIA, however, had an objection to the HC asking for the probe report.

"The HC is presiding over two appeals challenging the accused's rejection of bail on medical grounds and merits," he said.

"With the accused's death, the appeals stand abated as per section 394 of the CrPC," he said.

The high court then directed advocate Desai to give written submissions on whether the appeals stood abated, or if they could be amended so that the HC could continue exercising jurisdiction over the matter.

The NIA then intervened to say that it had two additional submissions to make.

ASG Singh referred to a comment made by Justice Shinde on July 19 while hearing the appeals.

Justice Shinde had said at the time that while the legal issues and charges against Swamy were a different matter, that aside, it had "great respect" for the work that Swamy did for the society when he was alive.

"We have all condoled the death of Mr. Swamy, but any personal comments or private comments coming from the judges or any law officer, especially in the open court, are normally being twisted by the press and social media," Singh said.

Justice Shinde responded saying that the court had never made any personal comments on the NIA, the state's conduct in the case, or legal issues involved.

Justice Shinde further said that if the NIA wanted, he was willing to take back his words on any comments he had made personally.

"If you want, I take my words back. Our endeavour is to stay fair and balanced always. That should be the end of the matter," Justice Shinde said.

"Our problem is that we don't have control on what happens outside (the court)," the HC said.

Singh then said that he had no grievances with the court. It was just that "public perception" mattered to agencies.

The Maharashtra government's counsel Aruna Pai, meanwhile, told the high court that the magisterial inquiry into swamy's death was yet to begin. The post-mortem, however, was conducted as per procedure, she told the HC.

The high court will hear the matter next on August 4.

Swamy died at the private Holy Family Hospital in the city on July 5. He was shifted from the Taloja prison to the private hospital following HC's intervention, and was undergoing treatment there for multiple ailments.