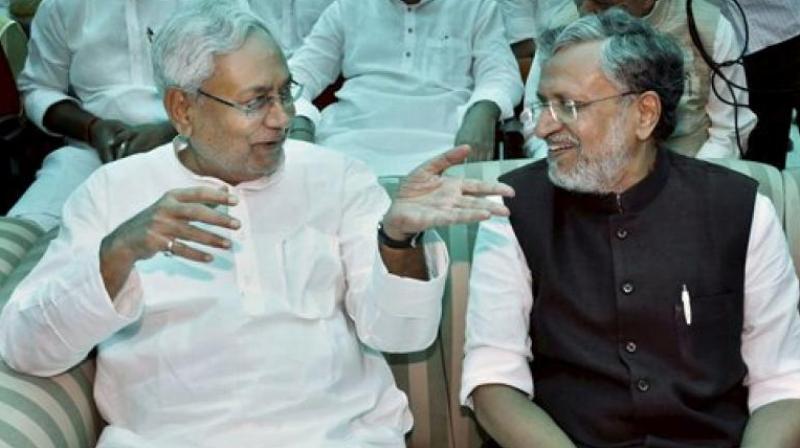 RJD members trooped into the Well of the House raising slogans and demanding resignations of the CM and the deputy CM. (Photo; PTI)

Patna: The alleged NGO scam in Bhagalpur rocked both Houses of the Bihar legislature for the second day on Wednesday with Opposition Congress and Rashtriya Janata Dal (RJD) raising slogans and demanding resignation of Chief Minister Nitish Kumar and his deputy Sushil Kumar Modi.

As soon as the Assembly met for the day, Leader of Opposition Tejashwi Yadav drew the attention of Speaker Vijay Kumar Chaudhary to an adjournment notice given by Rashtriya Janata Dal (RJD) over the alleged scam and urged him suspend the Question Hour and take up the issue.

The Speaker said the adjournment notice would be allowed at a proper time and urged the agitating members to allow the House to run.

However, RJD members trooped into the Well of the House raising slogans and demanding resignations of the CM and the deputy CM. Congress MLAs too joined them in the Well.

The protesting members claimed that pictures of Kumar and Modi were used at a function of NGO 'Srijan' in Bhagalpur.

They alleged government money was fraudulently transferred to bank accounts of the NGO by a "well-oiled racket comprising government employees and bank officials".

The chief minister was not in the House at the time. But, Deputy Chief Minister Sushil Kumar Modi was present.

As the opposition MLAs continued raising slogans, the Speaker adjourned the House till 2 pm.

In the Legislative Council, the matter was raised by Congress member Dilip Kumar Chaudhary. RJD and Congress members tropped into the Well of the Upper House shouting slogans against the government.

RJD leader Rabri Devi attacked Sushil Modi in the Legislative Council over the alleged scam. Later, talking to reporters outside the House, she demanded resignations of the chief minister and his deputy.

Modi had earlier said, "They should show documentary evidence in support of the charge against me or the CM. Merely shouting (slogans) by showing some photographs of some events showing our participation does not mean our involvement in the scam.