Besides education, Prof. Samanta used “sports as an agent of change” through KIIT and KISS. 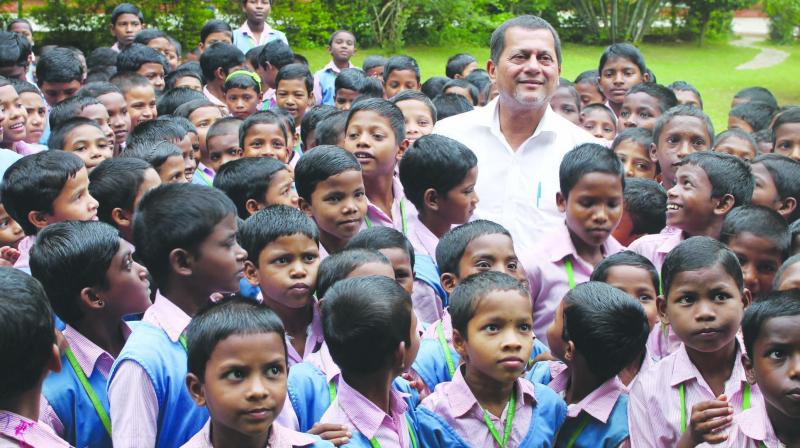 Prof. Achyuta Samanta, BJD MP with children from his institution

This is the story of  a man refused to be crushed by grinding poverty, struggled and clawed all the way to the top to turn tribal alienation, poverty and illiteracy upside down through the tool of "inclusive Education,where equity meets excellence. “Prof. Achyuta Samanta, BJD Rajya Sabha MP is the Founder of Kalinga Institute of Social Sciences (KISS). As being claimed by the officials KISS is “world’s largest intervention in the education and development of indigenous people. 27,000 children from the deprived indigenous communities of Odisha and neighbouring states are empowered with holistic education from kindergarten to postgraduation along with boarding facilities, clothing, healthcare, vocational and life skills free of cost.” But what is unique about KISS is that the institute has reportedly succeeded where the administration and state machinery continues to struggle-containing Maoist-led insurgency. As per reports the hunting ground of the Maoists are from among the poverty stricken tribal belts and rural areas. Reeling under poverty, youths both boys and girls join the insurgent outfits for a “better life”. Prof. Samanta decided to strike at the root of  the menace. KISS located in Bhubaneswar, Odisha, led to the reduction of the levels of Maoist related violence systemically by spreading the message of aspiration through education. Prof. Samanta was fifth of the seven siblings of his parents. His father worked as a menial worker in a company. When he was four years old, misery struck with a vengeance. His father died in a railway-track accident. His mother with her children moved to their native village, Kalarabanka. The hovel, the family lived in was virtually like a cowshed. At the age of six Prof. Samanta began helping his mother in her daily chores. The staple diet for the family was rice gruel and wild spinach. As the story goes, Prof. Samanta was one day spotted by a local school teacher who put him in the local primary school and provided him with books and other studying materials. He worked in the fields and  continued his studies. Everyday he walked nearly 16 kilometers to attend the school. To cut a long story short, Prof. Samanta excelled, earned a scholarship and graduated in chemistry and went on to complete his post graduation-Masters in Chemistry.  He then began teaching a college in Bhubaneswar. For anyone else the story could have ended here. He, instead chose to pursue his dream — “to see a poverty free world”.  In 1992, with a a small savings of Rs 5,000  he started two institutions in a very modest scale — Kalinga Institute of Social Sciences (KIIT) and Kalinga Instituteof Social Sciences (KISS). It all began with two-rooms and 12 students. Today, after over nearly two decades KIIT and KISS grew into a multi-disciplinary universities, providing quality “world class” education in more than 100 courses and catering to more than 30000 studentsfrom India and 40 other countries. KISS is a residential institute to empower and enable socially deprived indigenous children by providing them with free holistic education combined with other basic amenities. As a model institution in the country meant for the indigenous population (covering 62 tribes including 13 primitive tribes) KISS, boarding school provides education (from Kindergarten to post graduation), accommodation, food, health care,study material, clothing, vocational training, games and sports, computer education to the students for free. KISS is a home for 50,000 indigenous and marginalised children from the most backward parts of Odisha and neighboring states. Besies education, Prof. Samanta used “sports as an agent of change” through KIIT and KISS. He  has created Sports Infrastructure, the highest in any Universities in India.  Over  600 players from KIIT and KISS have participated in Olympics, ASIAD, Commonwealth, South Asian Federation and other National and International  Rugby and Chess are two sports which have been encourgaed by him. Prof samanta has been decorated with more than 200 International Awards and National Awards, Honorary Degrees from 38 Universities in India and abroad. Some of these include, Civilian Prize from Russia, Czech Republic and Mongolia. The Royal Kingdom of Bahrain has awarded him the Highest Civilian Prize — ISA Peace Prize for the Service to Humanity. He is also the recipient of Gusi Peace Prize, Asia’s Peace Prize. He is the only Odisha to speak at the House of Lords.