P Chidambaram is an economist, and a former home minister and finance minister. The manner in which he was arrested is depressing. 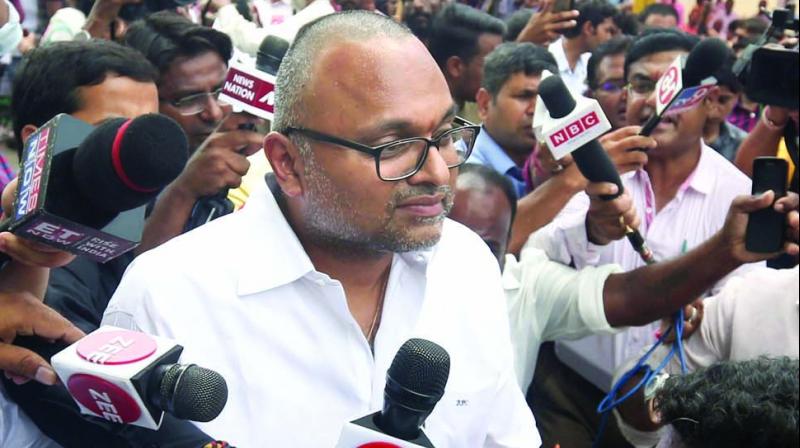 New Delhi: An Opposition protest meeting on Kashmir remained limited to just that — on the scrapping of Article 370 — with the Congress failing to turn it into a show of solidarity with beleagured former finance minister P. Chidamabaram, who has been arrested in a money-laundering case. In fact, Mr Chidamabaram’s son Karti, who reached the venue of the protest and was briefly seen on the dais, was politely told that the purpose of Thursday’s meeting was Jammu and Kashmir, after which he soon left.

The Congress put up a big show of solidarity with Mr Chidamabaram Wednesday, and said other Opposition parties would be approached for support, but not many were ready.

On Wednesday, DMK chief M.K. Stalin had issued a statement in support of the former Union minister, while on Thursday it was only West Bengal CM and Trinamul Congress supremo Mamata Banerjee who came out in his support officially.

“P. Chidambaram is an economist, and a former home minister and finance minister. The manner in which he was arrested is depressing. There are four pillars of democracy — democratic institutions, the Election Commission, the media and the judicial system. The democratic system of our country is crying, yet the judiciary is not coming to its aid,” she said.

The CPI(M) was more nuanced in its stance. Party general secretary Sitaram Yechury said: “The law would take its own course. But the manner in which the arrest was made was not proper.”

If not for Mr Chidamabaram, the Opposition parties did come together over the situation in Jammu and Kashmir. Leader after leader of the 10 parties who attended the protest called for the release of political leaders detained in the state, including former CMs Omar Abdullah and Mehbooba Mufti. Sources said the Opposition parties could again meet on Friday to see if such protests can be held in all state capitals across the country.

Congress MP Manish Tewari said what happened in J&K was totally unconstutitional. “This is not a fight limited to J&K. This is about the preservation of the Constitition.”

Mr Yechury said: “What is happening in Kashmir is a direct assault on the Indian Constitution. An assurance was given by then home minister Rajnath Singh to start the political process of dialogues and not use pellet guns. They have done a military takeover of Kashmir. This manipulation started months ago when they dissolved the Assembly and the government. All this which was done is actually a betrayal of Kashmir.”

Congress leader Ghulam Nabi Azad said: “99 per cent of people do not know what the Kashmir issue is. We must recognise that there is no democracy now. People are not bothered whether this is constitutionally correct or incorrect. They are just bothered that whatever the BJP has done with Kashmir is OK. Is this the idea of India? The ruling party has played a great joke on the Indian Constitition... the way the bill was brought.” He added: “There is something grave happening in the state and the government is hiding it from us. It is being reported by the foreign media, but not our media.”

The parties present included the Congress, TMC, CPI(M), CPI, DMK and RJD. Those absent were the Nationalist Congress Party, AAP and Bahujan Samaj Party. All the parties present had voted against the scrapping of Article 370 in Parliament.