Clad in white kurta and south Indian dhoti, Mr Chidambaram was brought to the court complex in a white Maruti Eartiga car by the CBI. 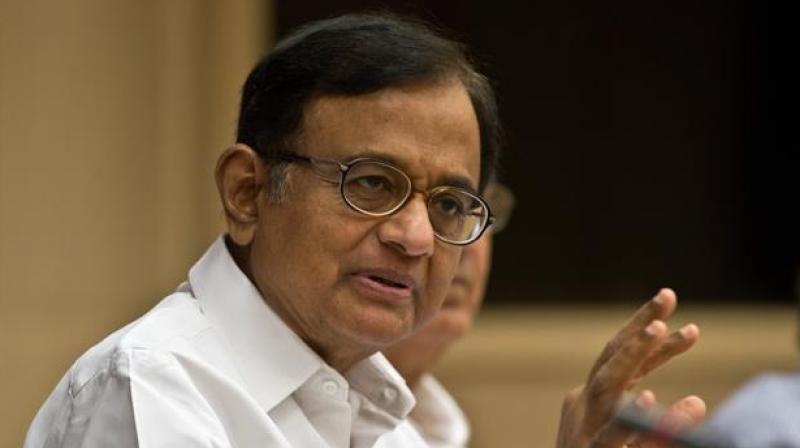 NEW DELHI: A high drama was witnessed outside Rouse Avenue special court where former  Union minister P Chidambaram was produced by the Central Bureau of Investigation in  connection with the INX media corruption case.  Each time any vehicle would enter the  court complex, a large number of mediapersons scrambled upon it with the hope to  catch the glimpse of the veteran Congress leader, who was finally brought to the court  complex at about 3:15 pm.

Clad in white kurta and south Indian dhoti, Mr Chidambaram was brought to the court  complex in a white Maruti Eartiga car by the CBI. The Congress leaders car was escorted  by five Gypsies of the  city police and the investigating agency.

Before Mr Chidrambaram was produced in the CBI designated court, his wife Nalini and  his son Karti took seats in the courtroom. A battery of lawyers representing Mr  Chidambaram were seen chatting with the veteran leader’s family, who outrightly refused  to take any questions from the media persons present inside the court complex.

Just half-an-hour before the former minister was brought by the CBI to the courtroom, his  lawyers - Kapil Sibal and Abhishek Manu Singhvi - made their appearance before the  designated judge. The CBI was represented by solicitor general Tushar Mehta. When the  hearing began, only a handful of media persons could gain entry into the courtroom  which was packed with lawyers.

All through the court hearing, which lasted for about 100 minutes, one could see Mr  Chidambaram wearing a broad smile on his face. The Congress leader himself is a  veteran lawyer.

While the defence lawyers aggressively argued for about an hour requesting the judge  that their client be released and there were no solid reasons to put the Congress leader  under police remand, Mr Mehta vehemently opposed it on the ground that the  investigating agency had to question him in the “classic” money laundering case.

It was after about 90-minutes that the judge ordered that Mr Chidambaram should be  remanded to CBI custody for four days. The judge directed that the medical examination  of the accused should be conducted in accordance with law. He, however, made it clear  that his family and lawyers should be allowed to meet the Congress leader for about  half-an-hour every day in police custody.

As Mr Chidambaram was being taken back by the investigating agency to the CBI  Headquarters at Lodhi Colony, his son said that he himself had undergone this ordeal  and this is what all we had expected. “We will see what happens in the Supreme Court  on Friday.”