According to health economist Rijo M. John, the COVID-19 cases are growing at the rate of 2.4% 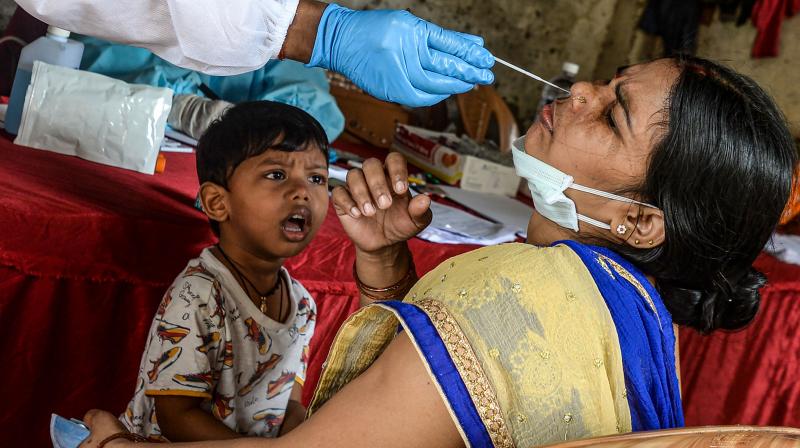 A boy watches as a health worker collects a nasal swab from his mother during a COVID-19 coronavirus screening in Mumbai.AFP Photo

With nearly 70,000 fresh detections, India’s overall tally of novel coronavirus crossed 30.5 lakh on Sunday. According to the union health ministry, the overall death toll in the country was 56, 706 with 912 new fatalities recorded in the last 24 hours.

The COVID-19 case fatality rate has declined to 1.86 per cent while the Recovery Rate reached almost 75 per cent.

The Health ministry officials said there are still 7,07,668 active cases of COVID-19 infection in the country which comprise 23.24 per cent of the total caseload.

With the recoveries of 57,989 patients in the last 24 hours, the total number of recoveries reached 22.80 lakh on Sunday. They added that India’s total recoveries now exceed the total active cases by nearly 16 lakhs.

“The constantly increasing recoveries have ensured that the actual caseload of the country viz. the active cases, has reduced and currently comprises only 23.24% of the total positive cases. This has also resulted in a gradually falling mortality rate. Currently at 1.86%, India’s Case Fatality Rate (CFR) is one of the lowest globally. The higher number of recoveries and declining mortality rate among COVID patients have shown that India's graded and proactive strategies are delivering results on the field,” officials added.

According to health economist Rijo M. John, the COVID-19 cases are growing at the rate of 2.4% and active cases are now going up (growth 1.1%). He said such high numbers can stress country's health infrastructure.

He added that although the country has a relatively low mortality rate (MR) at 1.9% the variation across states and high MR in some high burden states such as Maharashtra and Gujarat are worrying.

Mortality rates are extremely low in almost the whole of Northeast and many eastern states and Kerala also have very low MR, John said.

Officials said India exceeded cumulative tests of close to 3.53 crore on Sunday and for the last six days there have been more than 8 lakhs tests daily.

“The rise in the daily testing has been followed by decrease in the average daily positivity rate,” officials said adding India’s Tests Per Million have seen a boost touching 25,574 till Sunday evening.

Meanwhile, Serum Institute of India, said its planned vaccine COVISHIELD will be commercialised once the trials are proven successful and all the requisite regulatory approvals are in place.

It added the phase-3 trials for the Oxford-AstraZeneca vaccine, are still underway and only once the vaccine is proven immunogenic and efficacious, SII will confirm its availability officially.