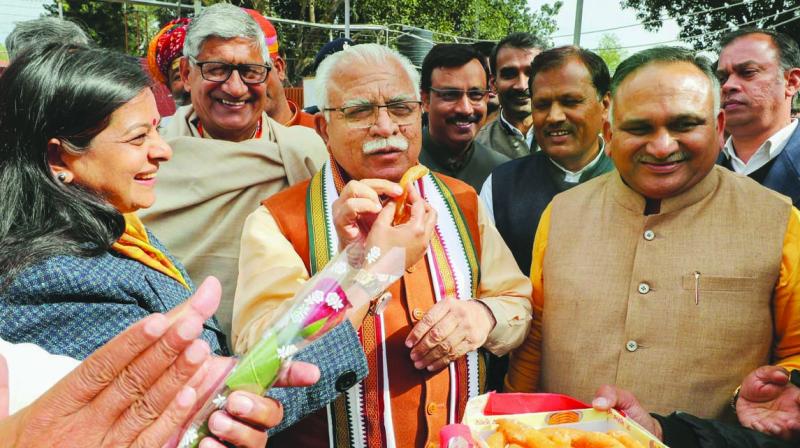 The Manohar Lal Khattar government is trying to win a second term in Haryana.

Chandigarh: It is going be a direct contest between the BJP and the Congress in the forthcoming Assembly elections in Haryana. With the INLD split into two, the parent party INLD and its breakaway faction JJP, will now only be the marginal players in the state politics. The INLD was founded by the late former deputy prime minister Devi Lal, and was central to the state politics even till the last Assembly elections as farmers and Jat voters rallied behind it.

In the last Assembly elections in 2014, the BJP made history by getting a majority on its own and forming the government for the first time in the state. The BJP won 47 out of total 90 seats, the ruling Congress was reduced to the third position with only 15 seats. The Om Parkash Chautala-led INLD emerged as the main Opposition party by winning 19 seats.

However, since then the political contours of the agrarian state had gone through a complete transformation. The BJP, a new entrant, has deep roots in the state politics now. The BJP showed its strength by capturing all the ten seats in the state in parliamentary elections this year. Even as some of the political experts believe that there is a lot of difference between the voting patterns of parliamentary and the state elections, it is clearly visible that the BJP has got the momentum on its side.

The Manohar Lal Khattar government is trying to win a second term and has given an "abki bar 75 par" slogan, indicating a win on more than 70 Assembly seats.

However, overconfidence can prove disastrous for the party, especially in case of a direct contest between the BJP and the Congress in the absence of any serious third player.

With the INLD remaining a pale shadow of what it once was, there is a possibility that the Congress could gain from its decimation in the state, especially after Bhupinder Singh Hooda has been given charge of poll campaign.

The things changed for the Congress after the party projected former chief minister Bhupinder Singh Hooda as the campaign in charge of the party. The Congress is trying to consolidate the dominant Jat voters through Mr Hooda, which the party feels it can achieve especially after the split in the INLD. The party is also inducting leaders who are deserting INLD in large numbers.  Last week Indian National Lok Dal's former Haryana unit president and ex-minister Ashok Arora joined the Congress.

Political observers believe that as the BJP is trying to consolidate non-Jat votes, the Congress is trying to cobble up Jat-Dalit voters, which together constitutes half the number of voters in the state.

By appointing Kumari Selja who is a dalit leader, the Congress is trying to give across a message that the party is still a preferred choice of dalit voters as it once was.