Police said demonstrators, who sat on the tracks, were being evicted and police escorts were being provided to public transport vehicles. 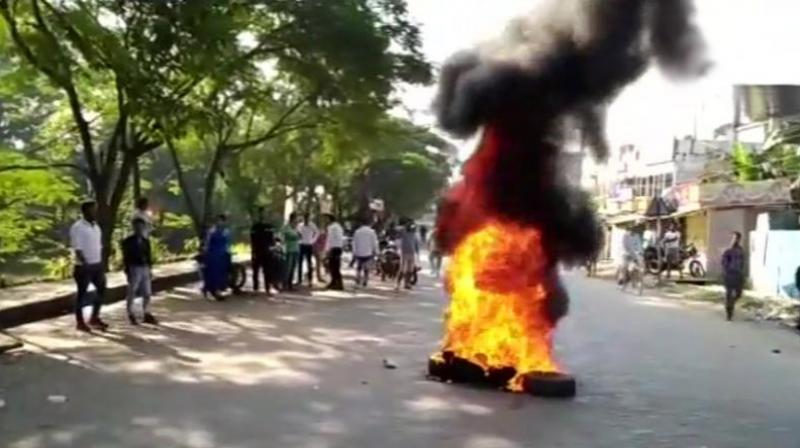 46 organisations have called the 12-hour bandh to protest against the Centre's bid to pass the Citizenship (Amendment) Bill, 2016, in the Winter Session of Parliament. (Photo: Twitter | ANI)

Guwahati: Protesters on Tuesday tried to put up blockades on railway tracks and disrupt train services across Assam as part of the 12-hour state-wide bandh called by 46 organisations against the Citizenship Bill.

Police officials said that the demonstrators, who were trying to prevent train movement by squatting on tracks, were being evicted. Demonstrators also burnt tyres on roads in various places of the state. Police escorts were being provided to public transport vehicles to ensure transport services functioned normally during the bandh.

The Krishak Mukti Sangram Samiti (KMSS), Asom Jatiyatabadi Yuba Chatra Parishad (AJYCP) and 44 other organisations have called the 12-hour bandh to protest against the Centre's bid to pass the Citizenship (Amendment) Bill, 2016, in the Winter Session of Parliament.

Political parties, including the Congress and the AIUDF, have extended their support to the bandh in the interest of Assam and its indigenous people.

All district magistrates and superintendents of police had been instructed by the BJP government in the state to take measures to maintain public utility services in view of the bandh call. A government communique in this regard had said that necessary pre-emptive and preventive measures to thwart the bandh call must be taken in view of the judgement of the Gauhati High Court. The deputy commissioners of respective districts had issued orders that all government officials should attend to their duties.

The Citizenship (Amendment) Bill, 2016 was introduced in the Lok Sabha to amend the Citizenship Act, 1955 to grant Indian citizenship to Hindus, Sikhs, Buddhists, Jains, Parsis and Christians who fled religious persecution in Bangladesh, Pakistan and Afghanistan and entered India before December 31, 2014.

State Finance and Health Minister Himanta Biswa Sarma had said on Monday that the Gauhati High Court had ruled that calling a bandh was an illegal act and so the statewide bandh called by 46 organisations on Tuesday cannot be allowed as it will amount to contempt of court.

KMSS leader Akhil Gogoi said this was the first time that they had called a bandh and they would not call it off as the very "existence of Assamese and their identity was at stake by the Bill".