BJP’s ‘rath yatra’ in Bengal, to be led by Amit Shah, deferred

BJP said Amit Shah will now kick off 'yatra' on December 5, instead of December 3, from Tarapith in Birbhum. 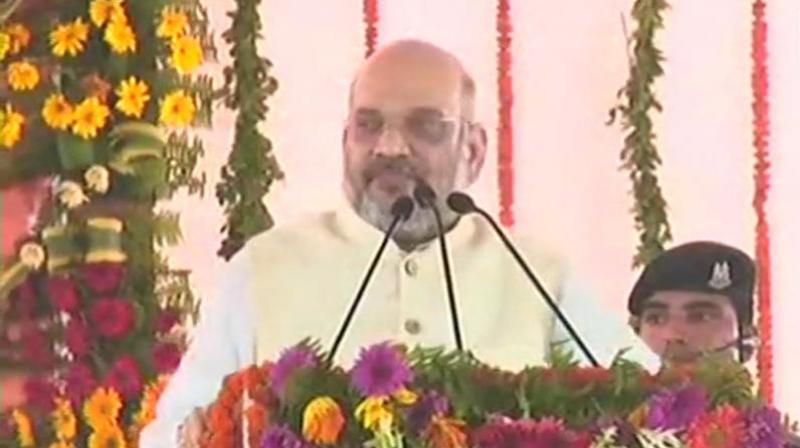 BJP has deferred a 'rath yatra', to be led by its chief Amit Shah, in Bengal by two days in view of the party's Assembly election campaigns in other states. (Photo: File | ANI)

Kolkata: The central leadership of the BJP has deferred a "rath yatra", to be led by its chief Amit Shah, in Bengal by two days in view of the party's Assembly election campaigns in other states, sources in the saffron party said.

Bharatiya Janata Party (BJP) state general secretary Sayantan Basu said Amit Shah will now kick off the "yatra" on December 5, instead of December 3, from the temple town of Tarapith in Birbhum.

Five states -- Rajasthan, Madhya Pradesh, Mizoram, Telangana and Chhattisgarh -- are set to go to the polls between November 12 and December 7.

"Taking the Assembly polls into consideration, the party has decided to reschedule the dates for the rath yatra in the state," a senior BJP leader said.

The "yatra" will be taken to all the 42 Lok Sabha constituencies in the state - three chariots covering 14 seats each - he added.

Sharing the programme details, Basu told news agency PTI, "The first rally will begin from Birbhum on December 5. The second and third rallies will start from Coochbehar district in the north and Gangasagar in the south on December 7 and 9 respectively. Amit Shahji will be present at all the three rallies."

The tableaus will stop at various places for public meetings and interactions, Mr Basu said.

At the conclusion of the "yatra", the party planned to hold a massive rally in Kolkata, which was likely to be addressed by Prime Minister Narendra Modi, he added.

Sources in the saffron party said the decision to take out the "rath yatra" was taken during Shah's two-day visit to the state in June.

Buoyed by its performance in the last panchayat polls in Bengal, the BJP has prepared its 2019 Lok Sabha election blueprint, targeting at least 22 parliamentary seats in the state.

"Bengal is of immense importance to our party as people are fed up with the Trinamool Congress (TMC) regime. We need to win the maximum number of seats from east and northeast India, especially Bengal," another BJP leader said.

Senior TMC leader and MP Abhishek Banerjee said his party was not bothered about the BJP taking out any "yatra" as the people of the state were with the ruling party.

"Let them take out the rath yatra. The people of the state will defeat the divisive politics of the BJP," he added.