India   All India  23 Oct 2018  'Not free to have own view as woman,' says Smriti on sanitary pad comment
India, All India

'Not free to have own view as woman,' says Smriti on sanitary pad comment

The Union Minister commented along the lines of the ban on women of menstruating age entering Sabarimala shrine. 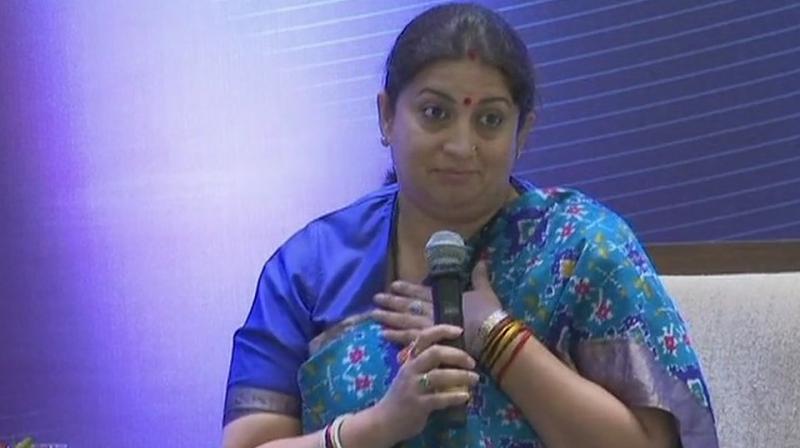 Addressing an event, Union Textiles Minister Smriti Irani also shared an anecdote when she had to wait outside a temple, with her son inside. (Photo: Twitter | ANI)

Mumbai: Union Minister Smriti Irani on Tuesday took to Twitter to clarify her comments she made along the lines of the centuries-old ban on women of menstruating age entering Sabarimala shrine in Kerala.

She tweeted, "As far as those who jump the gun regarding women visiting friend’s place with a sanitary napkin dipped in menstrual blood — I am yet to find a person who ‘takes’ a blood soaked napkin to ‘offer’ to any one let alone a friend."

Irani had earlier said, "It is plain common sense. Would you take sanitary napkins soaked in menstrual blood to a friend’s home? You will not. And do you think it is respectful to do the same thing when you walk into the house of God? So that is the difference. That is my personal opinion,” Smriti Irani said at the Young Thinkers’ Conference organised in Mumbai.

As far as those who jump the gun regarding women visiting friend’s place with a sanitary napkin dipped in menstrual blood — I am yet to find a person who ‘takes’ a blood soaked napkin to ‘offer’ to any one let alone a friend.

In a series of tweets, Irani said, "As a practising Hindu married to a practising Zoroastrian I am not allowed to enter a fire temple to pray. I respect that stand by the Zoroastrian community/priests & do not approach any court for a right to pray as a mother of 2 Zoroastrian children."

She also drew parallels to the entry of Parsi women inside fire temples during menstruation. Irani said, "Similarly Parsi or non Parsi menstruating women irrespective of age do not go to a Fire Temple."

She added, "These are 2 factual statements. Rest of the propaganda/agenda being launched using me as bait is well just that ... bait."

"But what fascinates me though does not surprise me is that as a woman I am not free to have my own point of view. As long as I conform to the ‘liberal’ point of view I’m acceptable. How Liberal is that?" Irani said.

The comments evoked sharp reactions on Tuesday on social media with people slamming the Union Minister.

The Sabarimala shrine opened on October 17, for the first time after the historic Supreme Court verdict allowing women of all ages to enter the Lord Ayappa shrine. However, no woman of the banned age group was able to enter the hill-top shrine amid massive protests by priests and devotees.

#WATCH Union Minister Smriti Irani says," I have right to pray,but no right to desecrate. I am nobody to speak on SC verdict as I'm a serving cabinet minster. Would you take sanitary napkins seeped in menstrual blood into a friend's home? No.Why take them into house of God?" pic.twitter.com/Fj1um4HGFk