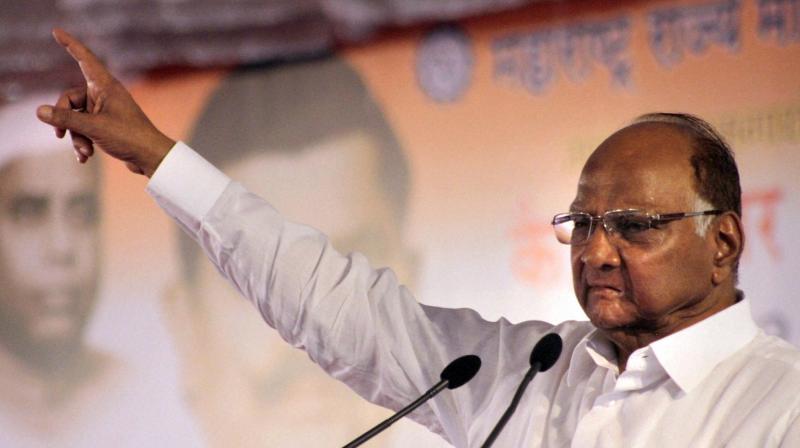 Asked about the Modi government's performance, Sharad Pawar said people's expectations from the government of the day were not fulfilled. (Photo: File | PTI)

Mumbai: Nationalist Congress Party (NCP) chief Sharad Pawar said on Tuesday that if the central government was "effective", there would not have been bribery charges at the highest level in the CBI. Pawar asked Prime Minister Narendra Modi to act swiftly over the matter.

He also attacked the BJP-led government at the Centre over the Rafale jet deal and demanded an investigation by a joint parliamentary committee over the issue.

Pawar was replying to queries during an interaction at the "Mumbai Manthan" conclave organised by television news channel Aaj Tak.

The tussle between Central Bureau of Investigation (CBI) Director Alok Verma and his deputy Rakesh Asthana turned ugly with the arrest of a deputy superintendent of police in the Special Investigation Team headed by Asthana over bribery charges.

Asked about the Modi government's performance, Pawar said people's expectations from the government of the day were not fulfilled.

"What was promised in 2014 is not seen on the ground after four years. (Former prime minister) Manmohan Singh tried his best to give a good government, intentions were best. That is not the situation today," Pawar said.

"If the present government was effective, there would not have been bribery charges at the highest level in the CBI. Still the prime minister is silent. He should act," the former Union minister said.

Pawar claimed that PM Modi was a strong leader for the Bharatiya Janata Party (BJP), but not the country.

"His ministerial team does not have the capacity to deliver. The Prime Minister's Office (PMO) is the most powerful. All decisions are taken there and the files are sent to the ministers to sign. The present government does only 'mann ki baat' and does not listen to 'jan ki baat' (people's voice)," he added.

Taking a dig at the government over the Rafale fighter jet deal, Pawar said the Centre should clarify why the price of one aircraft increased from Rs 570 crore to Rs 1,600 crore.

"There is room for suspicion. So there should be a joint parliamentary committee (JPC) probe. If the BJP stalled Parliament for three weeks for a JPC probe in (the) Bofors (case), why should the BJP, now in power, oppose a JPC?" he asked.

Asked if he felt there was corruption in the Rafale deal as alleged by Congress president Rahul Gandhi, Pawar said he had no information about it. "I only know that the aircraft is good. Rahul Gandhi may have more information than me about corruption," he said.

Led by the Congress, the opposition parties have been attacking the Modi government, alleging that it is procuring 36 Rafale jets from France at an exorbitantly high price. The Congress has also accused the PM Modi of "corruption", and "gifting" the offset contract for Rafale jets to Anil Ambani.

The government has denied the allegations of irregularities in the Rafale deal and industrialist Anil Ambani has also dismissed the Congress's charge that he got undue benefits from it.